Wait….what? I read the short, simple email over again. Then I read it to my husband. Could this be real? The owner of one of my grandfather’s paintings was asking if I was the family of the artist, P J Rose? Still not sure what to do, I texted my son. “Mom,” he texted back, “just write her back.”

Not really the first time someone has connected with me regarding one of his historic sea paintings, as Gary L of Boise, Idaho, contacted me several years ago regarding a painting he had obtained as a young man with a powerful poem on the back. Unfortunately, it had gone missing, but he recognized one of my grandfather’s pen names; i.e. P. J. Rose, Stanley McShane, J. Wesley Rose.

In this particular case, Diane Brown of California wrote, “I have inherited a PJ Rose painting, The Sole Survivor. The sinking of the Marguerite off the Cape of Good Hope in 1890. My grandfather got the painting from PJ Rose in San Francisco. My father inherited it and it has hung on our wall as long as I can remember. I am looking for a family member who might be interested in having this piece of history back in the family.”

Are you kidding?? The last book I published for my grandfather was called “Sole Survivor” after a short story included in the anthology that reprinted a number of his short stories and poems, as well as several of his paintings. Now I was to receive back the stunning painting named for that short story and the book? I was beyond thrilled–and totally blown away.

Diane and I exchanged a number of emails after that initial inquiry, in which I told her what little I knew of my grandfather and asked the story of her grandfather–the man to which the painting may have been given almost a century ago.

Diane related that her grandfather, Anthony (Brega) Brown came to the US from the Azores as an indentured servant when he was 7. Eventually Anthony ended up in San Francisco where he worked as a chauffeur. Her family remembers him being associated with the San Francisco de Young Museum after WW1. But could he and my grandfather, who would have been more than 20 years older, have met there? Not an unreasonable assumption given his artistic bent.

Diane feels she can possibly see several ways they might have connected, including the women each married, both being Christian, church-going women of Swedish descent.

According to Diane, not the best husband or father, and constantly broke, Anthony was known to trade and barter often. That would certainly characterize my grandfather as well, as the scalliwag was usually broke, being a gambler of penny mining stocks, which he also wrote about in “Hot Air Promotions.” The Brown family story is that her grandfather was given the painting or traded for it from P. J. Rose.

The painting is labeled very clearly on the back, “The Marguerite Wrecked Off the Cape of Good Hope – 1890 – P. J. Rose, 1st Officer.” Rose watched both his mother and his father, the captain, go down in a hurricane with her that day.

Diane noted that it “seems strange to let it go. It’s been a mystery all my life.” And in a poignant concluding comment added, “My dad wanted us to sing ‘will the circle be unbroken’ at his memorial service. I keep thinking of that song and this painting. It went from your grandfather to my grandfather, to my father, to me, and now back to his granddaughter who actually knew him…full circle.” 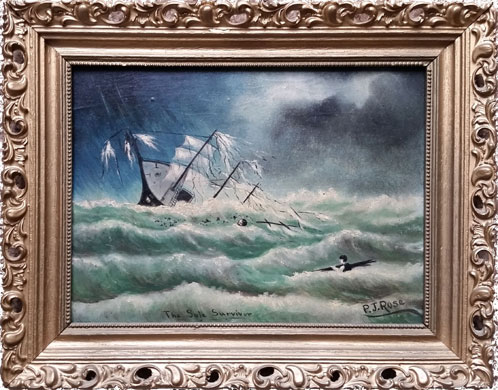 I am the beneficiary of a family who took beautiful and devoted care of one of my grandfather’s paintings, “The Sole Survivor.” I have no other paintings in this amazing condition, much less in an original frame. This is a priceless Christmas gift from a very caring and generous stranger; something I can also hand down with pride. In the meantime, I’ll enjoy the painting and the incredible story behind it with an eternally grateful heart. ©2016 Virginia Williams

Rosepoint reviews-July recap-Fourteen reviews in July. Were one of these your favorite? Variety of genres, authors, ratings to 5 star. NetGalley, author requests, and audiobooks. Don't miss another great book! My July recap.⁠
New Review- Vortex: An FBI Thriller by Catherine Coulter-#BookReview–A master story teller with multiple plots happening simultaneously. Hard to put down, tension-filled.⁠
New Review-This Much Huxley Knows-A Story of Innocence, Misunderstandings and acceptance by Gail Aldwin-The innocence of youth runs headlong into the wisdom of parents. The story is replete with suspicion and innuendo. The manipulation of words by this young wordsmith make the reading fun and amusing. I highly recommend it. 5 stars - CE Williams. A story of a 7 y/o boy solving the mysteries of his life. Sweet, contemporary story.⁠
New Review-Murder in Connemara (A Home to Ireland Mystery Book 2) by Angela M Sanders. Tara Meehan moved back to her mother’s childhood home in Galway. She is very busy trying to get her salvage shop open, along with the warehouse, but is impatiently awaiting her permit. She is becoming a part of the community ad trying to progress in her relationship with Danny. ⁠
New Review-The Perfect Ending by Rob Kaufman. Can this author truly go out with a bang or a whimper? It’s dark, delightfully deceiving, and emotionally wringing. Fully fleshed characters you’ll love (the MC not so much)! Gripping, page-turning thriller. Sure to keep you guessing to the end. And then that twist. OMG! This is one not to miss! My 5* review.⁠
#audiobook review-His & Hers by Alice Feeney. Insanely gripping, creepy, spicy narrative. Three POVs; his, hers, and the killer. Fast paced, well-plotted, creepy narrative spiced with hometown-childhood secrets, adult secrets. Twists and turns leave the listener spinning. This novel-audiobook totally envelopes the listener, sinister, gripping, full of suspense. And that twist at the end? Gotcha!⁠