Yes! The fascination of the seventh son of a seventh son! Is it more than folklore? More than the 1988 Iron Maiden album that stemmed from the folklore? I suspect there may have been more seventh sons born last century than this, but still, it conjures powerful visions of mystical or even biblical significance, doesn’t it? According to Wikipedia, it can go so far as to be broken down by regions:

Well, that last was borne of a book written in the year 1807-08 by Edward Kendall regarding his visit to the Newgate copper mine. Indeed, a radio drama aired in 1980 on the CBS Mystery Theatre called “The Iron Horse” by Sam Dann played off that account of mining discoveries. Jimmy Stewart starred in a 1940 movie called “The Philladelphia Story” that noted the legend and as recently as 2014 the fantasy-adventure film Seventh Son has as the main character a seventh son of a seventh son that featured Jeff Bridges and Julianne Moore. (Gees, never heard of it!)

To be authentically a seventh son of a seventh son, however, there must not be a female sibling separating the numbers. (Therefore, singer Perry Como could not legitimately claim the distinction. Lyle Lewis Aley, radio announcer was an unproven seventh, and Len Dawson, quarterback for the Kansas City Chiefs claimed the distinction without acknowledging where his dad stood in the family line. Como, however, could make musical magic with the best of them.)

Still, there are many books written that include the folklore theme as a plot–all fiction in the fantasy or science fiction genres, so who is to say it may or may not magically bestow super-human properties, cause I could find no non-fiction references.

Several popularly noted fiction books with the theme include: 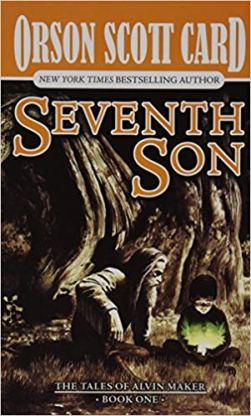 And, of course, the granddaddy, blockbuster of them all–the Harry Potter series by J. K. Rowlings, including Deathly Hallows (#7) 2009, which includes the 7th child of the 7th child (Ginny Weasley), a girl! (And the females have magical powers of their own.) These books were written for the 9-12 years age group. That’s fine–it got ALL ages to reading again!

With all the time and research, however, I was not able to find one non-fictional account of a real seventh son biography, memoir, or story. Still, we do love our folklore and stories handed down and wonder how the stories got started. If you’ve come across some true accounts, I’d love to hear them!

7 thoughts on “What is the Fascination of the Seventh Son of a Seventh Son? Do Seven Daughters Count?”

Leave a Reply to The Cozy Pages Cancel reply

New Review- Vortex: An FBI Thriller by Catherine Coulter-#BookReview–A master story teller with multiple plots happening simultaneously. Hard to put down, tension-filled.⁠
New Review-This Much Huxley Knows-A Story of Innocence, Misunderstandings and acceptance by Gail Aldwin-The innocence of youth runs headlong into the wisdom of parents. The story is replete with suspicion and innuendo. The manipulation of words by this young wordsmith make the reading fun and amusing. I highly recommend it. 5 stars - CE Williams. A story of a 7 y/o boy solving the mysteries of his life. Sweet, contemporary story.⁠
New Review-Murder in Connemara (A Home to Ireland Mystery Book 2) by Angela M Sanders. Tara Meehan moved back to her mother’s childhood home in Galway. She is very busy trying to get her salvage shop open, along with the warehouse, but is impatiently awaiting her permit. She is becoming a part of the community ad trying to progress in her relationship with Danny. ⁠
New Review-The Perfect Ending by Rob Kaufman. Can this author truly go out with a bang or a whimper? It’s dark, delightfully deceiving, and emotionally wringing. Fully fleshed characters you’ll love (the MC not so much)! Gripping, page-turning thriller. Sure to keep you guessing to the end. And then that twist. OMG! This is one not to miss! My 5* review.⁠
#audiobook review-His & Hers by Alice Feeney. Insanely gripping, creepy, spicy narrative. Three POVs; his, hers, and the killer. Fast paced, well-plotted, creepy narrative spiced with hometown-childhood secrets, adult secrets. Twists and turns leave the listener spinning. This novel-audiobook totally envelopes the listener, sinister, gripping, full of suspense. And that twist at the end? Gotcha!⁠
New review-Seven-Year Witch (Witch Way Librarian Mysteries Bk 2) by Angela M Sanders. Josie just discovered she’s a witch! She’s learning about her powers through letters from grandma. Engaging characters, including her kitty, Rodney. There is high drama, perceived curses, twists, turns, and torment over the situation with Sam. Entertaining narrative. ⁠