Unspeakable acts go on under our noses every single day. If you could do something about them would you? How far would you go? Shane Ahalt’s debut thriller will have you questioning your morality and your stance on vigilantism.

When Chris Caldwell, the chief of police of a small town, investigates the kidnapping of Tyler Creasy and the brutal and torturous murder of his parents, the investigation reveals dark secrets of the family. As the clues unravel and similar instances are discovered to have occurred over a period of more than 60 years, the question arises “Is this an isolated incident or is there something more sinister in the works?” Chief Caldwell’s investigation turns up more than he bargained for as history seems to repeat itself. Will he solve these vicious and violent murders or will they become cold cases? Will he discover what happened to Tyler? Find out in Shane Ahalt Sr.’s debut thriller, Out of the Red and Into the Black.

A child with serious abusive issues originating from parents has a lifelong cross to bear. Tyler Creasy and his friend Raquel are two such children. Accidental touches when young lead to a world of depravity I have never contemplated. The question that roars into your mind as you read this book is: “How can any parent do this to their own children?” 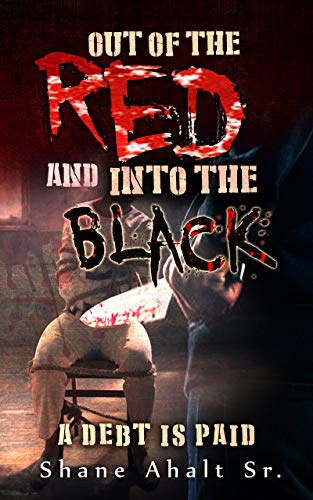 Brian Smart is a computer analyst with the F.B.I. He was rescued as a young man by someone who had been similarly subjected to such abuse. After being rescued Brian was loved and well educated. His foster father charged him with one task. When given the chance, he would rescue another child subjected to this abuse and thereby “pay it forward”. Brian begins to see this happening and sets out to rescue the child being abused.

The author has developed a skillful methodology to capture the offenders and bring them to justice. The justice is renegade in nature and therefore the rescuers are being sought by the same organization that Brian works for. Most of the crimes occur in four contiguous states and these are the area that Brian’s FBI group investigates.

The use of computer cyber security and advanced monitoring methods are intriguing and effective. I found myself having no sympathy for the recipients of their crimes. I did find that the overall crimes and subsequent retributions to be duplicitous. The two young people are being taught by Brian to assist other young people caught in this abomination.

I was torn between having hope for the victims and concern about the impact on their lives as they tried to make restitution for what happened to them. “Revenge is Mine” sayeth the Lord, certainly is not argued in this text. Rather “An Eye for an Eye and a Tooth for a Tooth” is the norm. I appreciated the authors’ attention to detail and methodology. Living in the bubble of not having been visited this issue was a far simpler way to live. We received this author request and download in the expectation of a review and these are my honest opinions. Trigger Warnings: Graphic descriptions. 4 stars CE Williams

The Author: Shane Ahalt Sr. is a father, husband, teacher, writer, and 21 year veteran of the United States Navy.

Upon graduating The George Washington University, he was commissioned in the Navy where he flew helicopters. When he retired from the Navy, he decided to give back to his community by becoming a High School Math teacher.

Although he is a native of the Washington D.C. suburbs. He is currently a teacher in Florida at a small alternative school.

Writing is a talent he stumbled upon and, to date, he has published one book, “Out of the Red and Into the Black.”