Inspired by the true story of Colonel Jimmy Doolittle’s raid on Japan in 1942, The Shangri-La Raiders is the next stunning installment of the When Heroes Flew WWII historical fiction series.

This gripping novel follows an American bomber crew through their secretive training, a harrowing raid on Japan, and on their desperate journey through occupied China to Chungking, the seat of the country’s wartime government.

The crew, along with an American missionaries’ daughter whom they’ve rescued, must evade the Japanese occupiers every step of the way. And amidst all the horror and turmoil of war, a romance blossoms between the rescued woman and the crew’s pilot.

When Heroes Flew: The Shangri-La Raiders is a captivating tale of bravery, determination and an unlikely love that will leave you hooked until the very end. 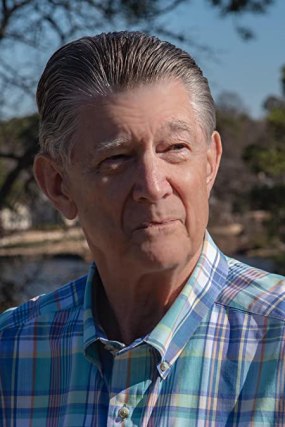 His debut novel, EYEWALL, which one reviewer called a “perfect summer beach read,” was released in May 2011 and went on to become a number-one best seller in Amazon’s Kindle Store.

PLAGUE (“One of the best thrillers of 2012″–novelist Al Leverone) came out in September 2012, and won the 2014 EPIC (Electronic Publishing Industry Coalition) eBook Award in the suspense/thriller category.

SUPERCELL (“Races along with the speed of a twister”–novelist Michael Wallace) was published in late 2013 and became a best seller on Kindle as well as the winner of the 2015 EPIC eBook Award in the suspense/thriller category.

Buzz’s fourth novel and third in his “weather trilogy,” BLIZZARD (“A terrific book”–novelist Deborah Smith) was released in February 2015. It led to his nomination for a 2016 Georgia Author of the Year award.

CASCADIA (“heart pounding”–Reed Farrel Coleman, NYT best-selling author WHERE IT HURTS) hit the market in July 2016 and went on to garner the 2018 EPIC eBook Award in the suspense/thriller category, making Buzz a three-time “Eppie” winner.

Before becoming a novelist, Buzz worked at The Weather Channel as a senior meteorologist for 13 years. Prior to that, he served as a weather officer in the U.S. Air Force for over three decades.  He attained the rank of colonel and received, among other awards, the Legion of Merit.

His “airborne” experiences include a mission with the Air Force Reserve Hurricane Hunters, air drops over the Arctic Ocean and Turkey, and a stint as a weather officer aboard a Tactical Air Command airborne command post (C-135).

In the past, he’s provided field support to forest fire fighting operations in the Pacific Northwest, spent a summer working on Alaska’s arctic slope, and served two tours in Vietnam. Various other jobs, both civilian and military, have taken him to Germany, Saudi Arabia and Panama.

He’s a native Oregonian and attended the University of Washington in Seattle where he earned a bachelor’s degree in atmospheric science; he also studied creative writing.

Buzz is a past president of the Southeastern Writers Association. He’s a member of International Thriller Writers, the Atlanta Writers Club, Willamette Writers, and Military Writers Society of America.

He and his special needs adult grandson live in Roswell, Georgia, along with a fuzzy and strangely docile Shih-Tzu, Stormy . . . probably misnamed.