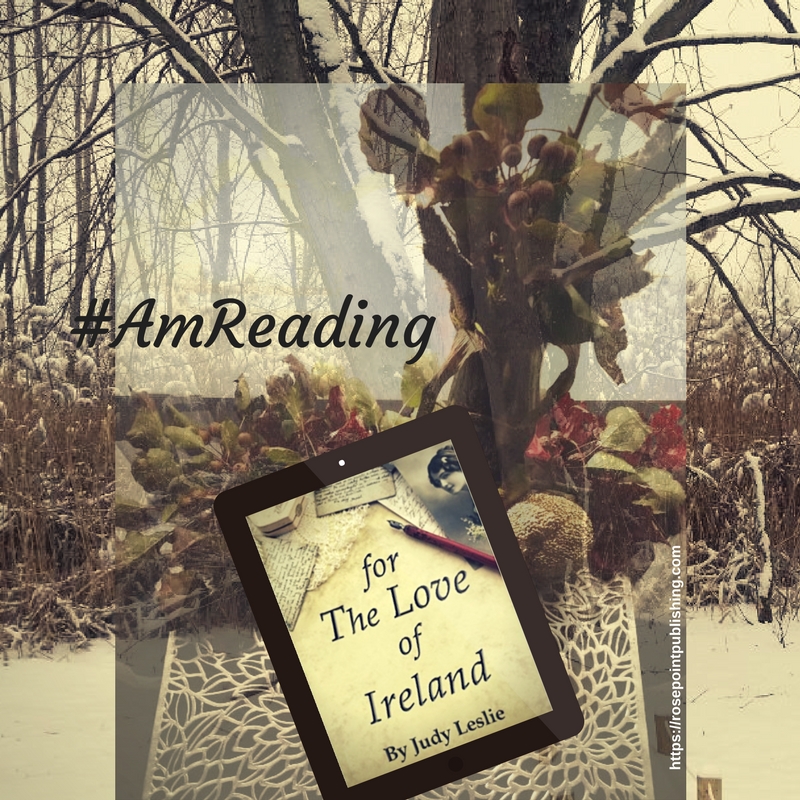 This week I am presenting Judy Leslie and her book For the Love of Ireland. I received a free download. The book was released on April 2, 2013, by CreateSpace. Amazon classifies the novel as literature and fiction, historical fiction, Irish and is 318 pages.

I will be presenting my review on Sunday,  March 11, 2018, and can tell you that so far I’m finding this historical fiction (about a real turn-of-the-century Chicago couple) eye-opening and compelling. In the meantime (from Amazon), here is the

Margaret Sullivan dines with politicians, rebels, and spies. She is an admired journalist with the Chicago Tribune publishing under a male nom de plume. Her unscrupulous husband is a prominent attorney and power broker with aspirations of his own. They are well-connected members of Chicago’s 1880’s Irish elite.

On her trip to Ireland to do research for a book she is writing, Margaret meets a charming one-armed Irish rebel named Michael and finds herself attracted to him and his ideas for liberating Ireland.

While traveling through the stone-walled back roads of the island, Margaret sees for herself how the poor are treated. She breaks her vow never to get involved, and soon questions if she can ever go back to her old superficial life in Chicago again. Overcome with her new found emotions and strong desire to help, Margaret finds herself easily convinced by Mrs. Delia Parnell that women can be just as crucial in the fight for Ireland’s independence as men.

Back home in Chicago Margaret publishes articles hoping to gain support in America for Michael’s cause. That is until he is arrested. Desperate, she turns to her jealous, devious husband for help…but he has a hidden agenda of his own.

Torn between her career as a journalist and compassion for those overseas, she finds herself trapped by her own aspirations. Soon things spin out of control both at home and abroad, and Margaret has to decide how much she is willing to sacrifice for Michael and her love for Ireland.

(Judy Leslie from Amazon Author Page)When I walked into the Antique shop in the historic town of Bellingham, Washington at the age of 21, I had no idea that I would soon become its owner and would be surrounded by things I knew nothing about. I researched everything from grandma’s collectibles to old tables and chairs. I quickly learned that there was a story attached to every object no matter how trivial it may seem to the average person. Old wedding gifts, items saved and sacrificed for, mementos, useful and frivolous objects, all filled my shelves.

I lived in the back of the shop with my cat Betty and cooked on an old wood stove that I fed with Presto Logs. In the evenings, I would sit in a creaky painted rocker, and scavenge through old black and white photographs and letters, pondering the lives of these long gone relatives. Did they know someday a stranger would be pawing their personal belongings, I wondered? I tried piecing an image together of what life must have been like when these items were new. Were these people happy back then? Had life turned out for them as planned?

When people came into my shop we would swap stories about old uncle’s Joe’s or aunt Gertrude’s hand-me-down trinkets and what they might be worth to someone that wanted that ‘junk’. Then I would remind them that perhaps they held some value that couldn’t be bought. Like a child’s first pair of ice skates or a set of hand embroidered tea towels made as a gift by a spinster losing her sight. Once I stirred their imagination they looked around my shop with fresh eyes and became curious about the objects surrounding them.

I would share what I had learned about whatever they were attracted to and soon they would be walking out the door with their new treasure. It was the story they bought, the article was just evidence of the legend. So, it only made sense that someday I would become a historical fiction writer.

Now, many years later with the shop long gone and countless writing classes under my belt, I’m researching the internet and locating out-of-print publications to find secrets about the past. Instead of antiques, I collect fragments of news articles about the lives of real people most have forgotten. I love doing the detective work and unwinding the threads of these various characters from long ago and weaving them back together again in a new version of their story.

My novel, For the Love of Ireland, evolved from information I discovered about a Chicago couple and their connection to Ireland’s Land League, and the secret activities of the Irish-American organization the Clan na Gael. If you would like to know more about my novel For The Love of Ireland, please go to http://www.for-the-love-of-ireland.com. There you can read about the real people my story characters are based on. ©2018 V Williams