You may have detected that this is actually an audiobook rather than my usual cell phone Kindle app and I’m positive that the narration was part of the reason I found this an absolutely eye-rolling LOL delight. This one goes all the way. 5 stars 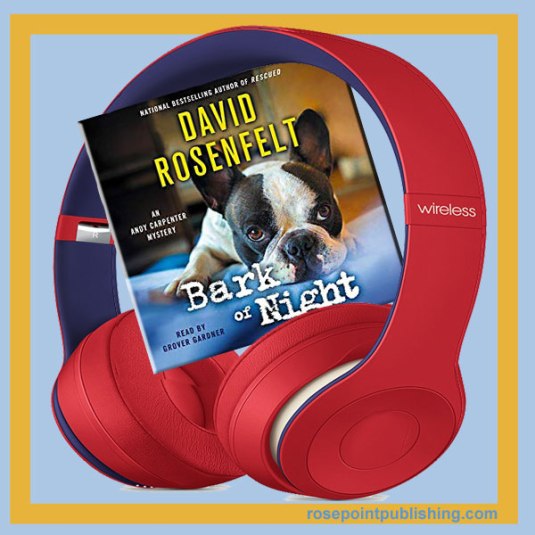 When defense lawyer Andy Carpenter’s veterinarian asks to speak to him privately at the checkup of his golden retriever, Tara, the last thing Andy expects is Truman. Tiny, healthy French bulldog Truman was dropped off days ago with instructions to be euthanized by a man everyone thought was his owner. But now the owner is nowhere to be found.

Andy is furious. Who would want to euthanize a perfectly healthy dog with no explanation? He is willing to whisk Truman away to the Tara Foundation, the dog-rescue organization which is Andy’s true passion. They will find a home for Truman. But that’s not all the vet tells Andy. Thanks to Truman’s chip, it’s discovered that the man wasn’t Truman’s owner at all…. Truman’s real owner was murdered.

It’s now up to Andy – with help from his loyal sidekick Tara, Truman, and the rest of the gang – to solve this case. In the latest in the popular Andy Carpenter mystery series, David Rosenfelt’s charmingly clever wit and love of dogs are back and better than ever.

As the nineteenth of this series, I’ve gotta ask myself, “why haven’t I seen this before?” There were eighteen before this one? So does that mean you can’t pick this one up or you have to go back to book one? Nope! This worked very well as a standalone.

Definitely a different take on a legal narrative, not a thriller, not a cozy, just a brilliantly choreographed mystery novel with a defense attorney that forthrightly suggests he’d rather not do legal work anymore. And really, he wouldn’t have to. He was left with a considerable inheritance and although would love to quit work, work continues to find him–at least not at a frenetic pace.

New Jersey lawyer Andy Carpenter is married to former policewoman Laura and still keeps open a small office with an office manager, and an eclectic group in his circle that includes Marcus, the description of which conjures up Lurch from the old Addams Family TV series. He and Laura have adopted a son which fits in well with his canine rescue foundation that includes a LOT of dogs. It was Tara, his beautiful golden retriever, that led him to the vet where he discovers the vet has a quandary–he has a bulldog named Truman that was brought in for euthanasia that he doesn’t want to…uh…execute the order. Carpenter is outraged and takes the dog to the Tara Foundation.

Turns out, the chip identifies the dog’s owner as one who was murdered shortly before he was brought to the vet. Carpenter, of course, will end up defending 20-year-old Joey Gamble brought in for the murder of a documentary filmmaker. He knows his client doesn’t match the vet’s description.

The fast-paced narrative weaves from one twist and clue to another with first-person Carpenter wise-cracking and snarking his way through the investigation with the help of Laura and his computer techie hacker. Thank heaven he has one of those, and although he may have to learn SOME of that stuff some day, this isn’t it.

It isn’t long before the whole case gets deeper and deeper into sparkling blue water–specifically off the Florida coast and the FBI gets involved. Nothing is ever simple, huh? And this isn’t. This went way beyond the murder of the filmmaker and actually has quite the ingenious well-plotted storyline.

This is an absolutely delightful romp full of humor, light-hearted suspense, and an engaging group of characters. I love the self-deprecating Andy Carpenter who often relies on his ex-cop wife to know where to turn next.

I received this audiobook from my local library (thank you!)–they have a remarkable selection–and was thoroughly entertained and invested with this one. Can NOT wait for book 20, which I’ve requested through NetGalley (please, please, please…). Totally recommended for anyone looking for an unpredictable but amusing hoot. It’s good to laugh.

The Author: (Amazon Author Page) David Rosenfelt, a native of Paterson, New Jersey, is a graduate of NYU. He was the former marketing president for Tri-Star Pictures before becoming a writer of novels and screenplays. “Open And Shut” was his first novel; “First Degree,” his second novel, was named a best book of 2003 by Publishers Weekly. He currently lives in Southern California with his wife and 35 dogs.

(Goodreads Author Page) I am a novelist with 27 dogs.

I have gotten to this dubious position with absolutely no planning, and at no stage in my life could I have predicted it. But here I am.

My childhood was relentlessly normal. The middle of three brothers, loving parents, a middle-class home in Paterson, New Jersey. We played sports, studied sporadically. laughed around the dinner table, and generally had a good time. By comparison, “Ozzie and Harriet’s” clan seemed bizarre.

I graduated NYU, then decided to go into the movie business. I was stunningly brilliant at a job interview with my uncle, who was President of United Artists, and was immediately hired. It set me off on a climb up the executive ladder, culminating in my becoming President of Marketing for Tri-Star Pictures. The movie landscape is filled with the movies I buried; for every “Rambo”, “The Natural” and “Rocky”, there are countless disasters.

I did manage to find the time to marry and have two children, both of whom are doing very well, and fortunately neither have inherited my eccentricities.

A number of years ago, I left the movie marketing business, to the sustained applause of hundreds of disgruntled producers and directors. I decided to try my hand at writing. I wrote and sold a bunch of feature films, none of which ever came close to being actually filmed, and then a bunch of TV movies, some of which actually made it to the small screen. It’s safe to say that their impact on the American cultural scene has been minimal.

About fourteen years ago, my wife and I started the Tara Foundation, named in honor of the greatest Golden Retriever the world has ever known. We rescued almost 4,000 dogs, many of them Goldens, and found them loving homes. Our own home quickly became a sanctuary for those dogs that we rescued that were too old or sickly to be wanted by others. They surround me as I write this. It’s total lunacy, but it works, and they are a happy, safe group.
http://us.macmillan.com/author/davidr… 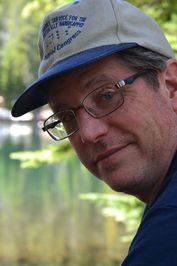 The Narrator: Grover Gardner’s narration career spans twenty-five years and over 550 audiobook titles. AudioFile Magazine has called him one of the “Best Voices of the Century” and features him in their annual “Golden Voices” update. Publishers Weekly named him Audiobook Narrator of the Year for 2005. His recordings have garnered 18 “Golden Earphones” awards from AudioFile and an Audie Award from the Audio Publishers’ Association.
http://grovergardner.blogspot.com/