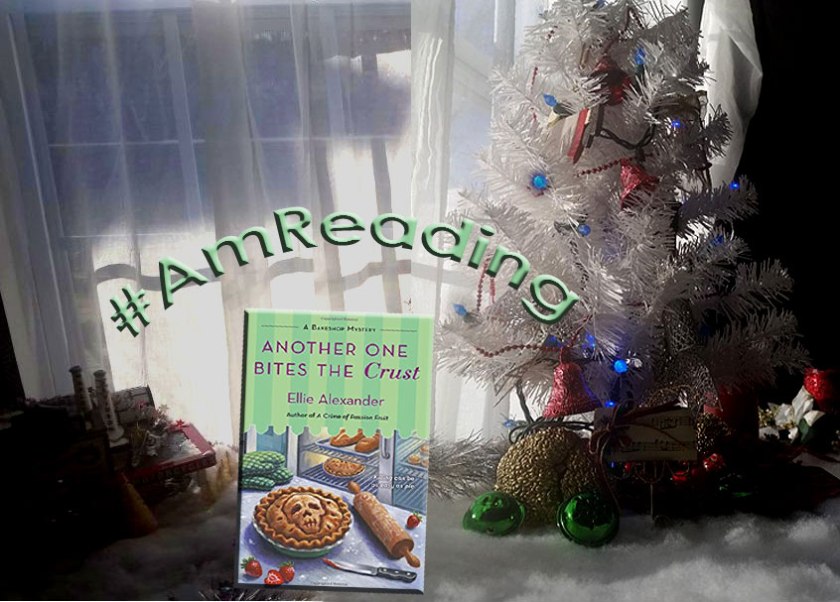 This week I am presenting Ellie Alexander and her book Another One Bites the Crust. This is a download from the publisher and NetGalley. The book will be released on January 2, 2018 by St. Martin’s Paperbacks. Amazon classifies the novel as a mystery, thriller & suspense, culinary, and amateur sleuths and is only 316 pages.

I will be presenting my review on Sunday, December 24, 2017, and can tell you that so far it’s a cozy mystery very different than I’ve read before. In the meantime (from Amazon), here is the

Torte—the beloved small-town bakeshop run by Jules Capshaw—is set to hit the stage. But who would have guessed that murder would makes a surprise appearance?

It’s the role of a lifetime for Jules. The Shakespeare Festival has returned to Ashland, Oregon, for the season and Torte has been cast as the supplier of Elizabethan-era treats for the main event. But on the eve of opening night, a brawl between Jules’s friend Lance, the artistic director, and a strapping young thespian named Anthony almost brings down the house. . .and the next morning, Anthony is dead. Jules knows that Lance loves his drama—and his just desserts—but she also knows that murder is way off-script for him. Now it’s up to Jules to cut through a bevy of backstage betrayals and catty co-stars who all have their own secrets—before the curtain drops on someone else. . .

About the Author: (From Amazon Author Page)

“Ellie Alexander, author of the Bakeshop Mystery Series (St. Martin’s Press), is a Pacific Northwest native who spends ample time testing pastry recipes in her home kitchen or at one of the many famed coffeehouses nearby. When she’s not coated in flour, you’ll find her outside exploring hiking trails and trying to burn off calories consumed in the name of research. Another One Bites the Crust is the seventh in the Bakeshop mystery series.”

New Review-Gamblers, Fools, and Fate On The Road To Key West Book 13 by Michael Reisig. Mind-blowing adventure, amazing heroes, despot villains, sensational pets, and non-stop action. Michael's books are always fast-paced, multi-layered, and filled to the brim with wild characters and real exotic locations mixed with the author's own brand of humor and experience. My 5* star review.⁠
The New Zealand Travellers mission did not go well with the indigenous Maori natives. They must avoid any negative media coverage as they pursue the selection of the third location. Meanwhile, the reality TV show (Hunter in Saxon England from the first Traveller mission) has reaped enormous rewards from licensed merchandise to a popular massive global audience. They decide on the Byzantine Empire Traveller mission. An amazing concept—time travel back one thousand years. So many moral dilemmas to resolve. What treasures will they find? The history, the architecture, the art?⁠
New Review-Keep Me Close by Jane Holland. A slow-burning #mediccalthriller that poses the problem of the abuse of our elderly, particularly those depending on nursing care. Procrastinating protagonist delays reporting abuse for fear of being thought the perpetrator. But something is happening to her mother and her mother can't tell her. ⁠
New Review—False Witness by Karin Slaughter. The novel includes the contemporary atmosphere of the impact of the Covid pandemic while examining each piece of the puzzle, the exploitation, the cold disengagement of the accused. Juxtaposed against the court drama is the struggle of Callie, the desperation of Leigh, and the limitations of normal public function due to the virus. I was grossed out on more than one occasion and the language was abominable. The book examines horrifically disturbing issues. While the story might be engrossing, the level of mayhem coupled with the language was over the top for me. This is my first and last book by this author. Graphic scenes, obscene language.⁠
New Review--Crossing Lines: A Spellbinding CIA Romantic Suspense Thriller by Adrienne Giordano. Elizabeth Aiken has changed her name and gone underground. A world class assassin is on her trail with a large bounty for her demise. Once made, an operative is no longer useful and the CIA has left her on her own! Thrown together by the desperate need of the young woman and her Sir Galahad, this story is very entertaining and brisk. This well-developed story will keep you on the edge of your seat 5*.⁠
New Review-Hemlock for the Holidays (A Fine Art Mystery Book 3) by Paula Darnell. Amanda Treat is getting ready for the Christmas season in Lonesome Valley. She is a fairly new resident, divorcée, and starving artist. She has a golden retriever named Laddie and a “mercurial” calico cat named Mona Lisa. Multi-focused and well-plotted, but too slow paced for me. Cozy mystery with animals, art, and the struggles for sales. ⁠