The twenty-seventh entry in the #1 New York Times bestselling series isn’t just the biggest case of Stephanie Plum’s career. It’s the adventure of a lifetime.

When Stephanie’s beloved Grandma Mazur’s new husband died on their wedding night, the only thing he left her was a beat-up old easy chair…and the keys to a life-changing fortune.

But as Stephanie and Grandma Mazur search for Jimmy Rosolli’s treasure, they discover that they’re not the only ones on the hunt. Two dangerous enemies from the past stand in their way—along with a new adversary who’s even more formidable: Gabriela Rose, a dark-eyed beauty from Little Havana with a taste for designer clothes. She’s also a soldier of fortune, a gourmet cook, an expert in firearms and mixed martial arts—and someone who’s about to give Stephanie a real run for her money.

Stephanie may be in over her head, but she’s got two things that Gabriela doesn’t: an unbreakable bond with her family and a stubborn streak that will never let her quit.

She’ll need both to survive because this search for “fortune and glory” will turn into a desperate race against time with more on the line than ever before. Because even as she searches for the treasure and fights to protect her Grandma Mazur, her own deepest feelings will be tested—as Stephanie could finally be forced to choose between Joe Morelli and Ranger.

Cripes! What happened and where did the other Janet Evanovich go? Years ago, and I mean well before I even started reviewing, the CE and I used to listen to her audiobooks on our many trips. They made crossing the desert go faster, mountain ranges less hairy. So I was pretty shocked at this latest audiobook, and less you really have to ask—no, I  have neither read nor listened to others in this series. I just saw “Evanovich” and remembered the “old times.”

Well, groan. Despite the amazing narration of Lorelei King using many voices and New Jersey accent, the protagonist left me a bit flat. Stephanie is a mess. She’s not terribly good at what she does, nor terribly smart. What she is—according to new character Gabriela Rose, is lucky.

Stephanie apparently is one third of the dreaded triangle (Ranger—fabulously rich and great in bed, and Morelli—Jersey cop). Lula is a strong “partner” in the bond business, and then there is Grandma Mazur, who is just plain obnoxious. It’s her recently widowed grandmother that has set her on the latest adventure—finding a fabulous treasure, joined by Potts (who is well past annoying into egregiously obnoxious).

If you can get past both grandma and Potts, there is a mystery that does hold interest and adventure as they tick off each of the nine(?) hints to the treasure held by members of the mob apparently known to good ole grandma. (Thank heaven mine stuck closer to gardening.)

Heavy into the New Jersey mob scene, the accents, food, and back alley streets definitely spun atmospheric illusions. The mysterious Gabriela held my interest as well and will apparently spin off on a series of her own. Thinking I might try that one but reading any of the previous 26 of this series? I don’t think so.

The Author: Janet Evanovich is the #1 New York Times bestselling author of the Stephanie Plum series, the co-authored Fox and O’Hare series, the Knight and Moon series, and the Lizzy and Diesel series as well as twelve romance novels, the Alexandra Barnaby novels, Troublemaker graphic novel, and How I Write: Secrets of a Bestselling Author.

The Narrator: Lorelei [King] is a multi-award-winning narrator of audiobooks, recording the works of best-selling authors Janet Evanovich, Darynda Jones and Patricia Briggs, among others. She is one of the first inductees into the Audible Narrator Hall of Fame.

New Review-Hang the Moon by Jeannette Walls. Down home literary spice fiction of life in the mountains of Virginia back in booklegging days. Strong female protagonist—great characters. Well-paced and gripping. A period piece that put you in the middle of it. The roaring twenties, a crazy time--flappers and speakeasies--and prohibition.
New Review-Devil’s Way by Robert Bryndza-Kate Marshall Book 4. The author writes an engaging tale of the loss of an only child, the frustration of anyone who has a missing child. A little one can disappear in the blink of an eye. Long after the searches are over, a mother still can't let it go. Perhaps the detective agency of Kate Marshall can figure out what happened? A CE review.
New Review-Clive Cussler The Sea Wolves by Jack Du Brul. The beginning of WWI prior to the US involvement--still much going on behind the scenes. The author ties his story into the sinking of the Lusitania, which sounds like believable, historical fiction. Interesting incite into WWI technology.
New Review-Books 2 and 3 of the Mitzy Moon Mystery series, Tattoos & Clues and Wings & Broken Things. Too fun cozy mystery with elements of the paranormal, amazing diversity of characters and the ghosty element. I enjoyed Book 2, but it was Book 3 and the character development that sealed this series as being one of my new favs. Fast, snarky reads. I'm looking for my next book in this series.
The Sandcastle Hurricane by Carolyn Brown. A feel-good Hallmark-type novel for the upcoming holiday season. A variety of damaged and aged characters come together to wait out and survive a hurricane and find peace with each other and those they loved.
New Review-The Nature of Things (Finley O’Sullivan Book 2) by Debra Webb. Finley O’Sullivan and her cohorts create a private investigation agency. Things turn deadly when she digs into the Winthrop murder. Wayyy deadly. A CE review. 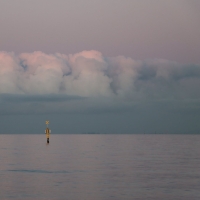