A domestic-military thriller review by the CE.

Special operators work against the clock to stop a radical extremist from detonating a dirty bomb during a Monday night football game near Washington, DC. in this award-winning domestic terrorism thriller.

Phantom Force Tactical’s Nicholas “Colt” Colton thought the radical extremist he captured years ago was locked away for good. Unfortunately, a new classified mission reveals that the threat is still very real, and corruption within the U.S. government runs deep.

Task Force 2 agent Josephine “Joey” Summers has been working her own angle, trying to figure out where the terrorist leader will strike next. She’s come up with a very plausible—and terrifying—theory, but doesn’t know who she can trust. After teaming up with a retired Navy SEAL, she discovers the plot is even bigger than she’d imagined—and the consequences much more alarming.

When the stakes are this high, promises must be kept. And when thousands of people could die, sacrifices must be made. Only by letting go of their pasts will they have any hope of stopping the chaos. But courage and commitment—plus a pledge—fuse to create an outcome that is both unpredictable and unimaginable.

All books in this series can stand alone. 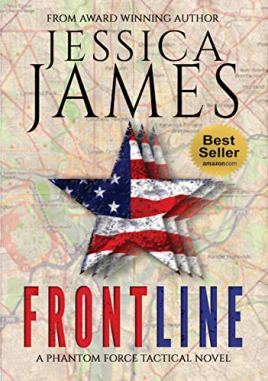 This is a fast-moving framework for espionage at the highest level. Jessica James has written a quick moving tale of treason at the highest level of government. Former Navy Seal Nicholas Colton is working with an off the books’ agency called Phantom Force. Working directly with the President and carrying the highest security clearance available, Nick helps to defuse a well devised terrorist plot.

Josephine is a chance encounter who turns into a valuable asset in the enterprise. Both Nick and Josephine are widowed and do not want to be involved or hurt again. The author handles this relationship with understanding and comfort.

Government intelligence sometimes gets in its’ own way. A highly placed foreign operative whose goal is chaos at a major sporting event that would foul a major metropolitan area adds to the plot.

Highly placed government officials want to bring down the United States and teach it a lesson for interfering in other countries business. A dirty bomb may be the way to cause this catastrophe. Can Nick and his team accomplish this task? The novel could be a playbook for the current situation in Washington. Can Nick and his group stop the plot to cause a major international event similar to the bombing of the twin towers? Infiltrators at the highest level of the US government are involved in planning and executing the plot.

The overall book is a fast read and very satisfying. I feel the author may have had some of these experiences herself. She handles the entire situation with sympathy and understanding. I appreciated the slow and tentative road to intimacy in this novel. Rather, it is two adults getting to know each other while both are reeling from past experiences and that is refreshing. Read and enjoy! 5 stars CE Williams

FTC Disclosure: I received a complimentary copy of this book from BookBub. These are my honest thoughts.

The Author: Jessica James‘ award-winning novels are inspired by her love of the land, her belief in everlasting love, and her curiosity about the past. She enjoys transporting readers back in time with complex characters and stories that stir deep emotion.

By weaving the principles of courage, devotion, and dedication into each book, James attempts to honor the unsung heroes of the American military–past and present–and to convey the magnitude of their sacrifice and service. Her novels appeal to both men and women and are featured in library collections all over the United States including Harvard and the U.S. Naval Academy.

James is a four-time winner of the John Esten Cooke Award for Southern Fiction, and has won more than a dozen other literary awards, including a Readers’ Favorite International Book Award and a Gold Medal from the Military Writers Society of America.

Get your choice of one of two books when you sign up for her newsletter (or get them both, if you can’t decide). The first one is From the Heart: Love Stories and Letters from the Civil War. The other is a bestselling romantic suspense novel Protecting Ashley. Sign up today!

New Review-Murder in Connemara (A Home to Ireland Mystery Book 2) by Angela M Sanders. Tara Meehan moved back to her mother’s childhood home in Galway. She is very busy trying to get her salvage shop open, along with the warehouse, but is impatiently awaiting her permit. She is becoming a part of the community ad trying to progress in her relationship with Danny. ⁠
New Review-The Perfect Ending by Rob Kaufman. Can this author truly go out with a bang or a whimper? It’s dark, delightfully deceiving, and emotionally wringing. Fully fleshed characters you’ll love (the MC not so much)! Gripping, page-turning thriller. Sure to keep you guessing to the end. And then that twist. OMG! This is one not to miss! My 5* review.⁠
#audiobook review-His & Hers by Alice Feeney. Insanely gripping, creepy, spicy narrative. Three POVs; his, hers, and the killer. Fast paced, well-plotted, creepy narrative spiced with hometown-childhood secrets, adult secrets. Twists and turns leave the listener spinning. This novel-audiobook totally envelopes the listener, sinister, gripping, full of suspense. And that twist at the end? Gotcha!⁠
New review-Seven-Year Witch (Witch Way Librarian Mysteries Bk 2) by Angela M Sanders. Josie just discovered she’s a witch! She’s learning about her powers through letters from grandma. Engaging characters, including her kitty, Rodney. There is high drama, perceived curses, twists, turns, and torment over the situation with Sam. Entertaining narrative. ⁠
TV Netflix Series Outlander vs #Audiobook by Diana Gabaldon—Was the TV version true to the original books? And which do you prefer? How many seasons are available—will there be another? Some of the questions you've been burning to have answered. Are you a fan and find this truly bingeworthy? What is it that is so compelling? The action-adventure, the time travel, the characters? Or Claire and Jamie? Have you read one of the books? (Hang in there--they are long and sometimes graphic.) I discuss both the #Netflix version and the audiobooks. Mercy.⁠
New Review-One Little Lie by Christopher Greyson. Twisted tale of how lies can escalate and Kate already had enough problems. Kate is a mess. She’s carrying major baggage and not doing well with it. Her attorney husband broke up the marriage to go live with a mistress. He may marry her and in the meantime they want the kids. She is still in mourning over her sister. Her finances are in ruin and she is woefully short on her resume owing to her marketing promo concentration for her ex. Her self-confidence is somewhere in the minus level. Now she has a stalker. She is seeing a therapist (mostly for the meds, although they seem to be doing little to relieve her anxiety). A suspense novel, flawed characters, entertaining.⁠