An Historical Legal Thriller review by the CE.

Author Margaret Atwood creates a dystopian future in The Handmaid’s Tale.  James Musgrave’s sexist dystopia is based on fact.

Attorney Clara Foltz’s California legal team is chosen by President Grover Cleveland to defend a mulatto suffragette who has assassinated his Supreme Court nominee, Justice Marshal Owens.  When her client is found dead in the jail cell, the hunt begins for the killer.

“James Musgrave’s The Angel’s Trumpet is one of those rare historical mysteries that is both entirely plausible and yet truly original.   A richly researched adventure into the complex social web of Gilded Age Washington, featuring deeply-realized and re-imagined luminaries including actress Sarah Bernhardt and President and Mrs. Cleveland, the novel is also surprisingly modern in its sensibilities, a compelling romp into an earlier era’s struggle with addiction and vice and secrecy and race relations, and, most of all, hidden sources of power.  You will read this book in one sitting–and you will be very glad that you did.  A meticulously-plotted gem from a master of the genre.”   Jacob M. Appel, author of the Dundee International Book Award winner, The Man Who Wouldn’t Stand Up. 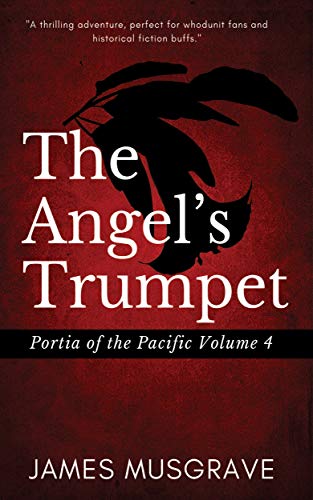 Explore late 19th Century life in our nation’s capital in this intriguing mystery. Grover Cleveland and his young wife are intricately involved in the plot. When a young woman stabs to death a Supreme Court nominee and waits to watch him die, the intrigue expands.

Clara Shortridge Foltz is chosen to defend the killer who is caught red-handed with her hand on the knife. Immediately the question of why comes to mind: Clara is described as a three-time loser in defending clients. Should be an open and shut case then, right?

Add in other historical figures from this time period including the Divine Ms. Sarah Bernhardt and Susan B. Anthony and the narrative becomes a political basketball.

Enjoy a ride through the Suffragette movement, the kidnapping of a President’s wife and a sinister plot to destroy evidence and the defendants, and you have a real page-turner. Washington, DC during this time period was certainly not a place you would want to live!

The characters are well developed and exhibit independence of character clearly missing in many women of that time period. They are looked down upon by most of the males in this book. Washington DC is described as a place where a negro needed to go if they wanted to succeed. Meanwhile, the Supreme Court is declaring some legislation unconstitutional to reverse desegregation legislation during the post-civil war era.

The end product is a microcosm of the problems facing the population during that time period. Many of those problems still linger today but it is a pleasure to revisit that era and reinspect the issues.

We received this digital download from the publisher through NetGalley in anticipation of an honest review and these are my independent opinions. 5/5 stars CE Williams

The Author: James Musgrave was born in Fall River, Massachusetts. He taught as a Professor of English and worked as a Supervisor, Management Development at Caltech, Pasadena and at various San Diego colleges. He is now the author and publisher at EMRE Publishing, LLC in San Diego. He has won many writing awards, and his mysteries are “featured selections” by the American Library Association. He was also a Finalist in the Bram Stoker Awards, First Place Award for Best Historical Mystery in the Chanticleer International Book Awards, and a Finalist in the Heekin Fellowship.

New Review-Gamblers, Fools, and Fate On The Road To Key West Book 13 by Michael Reisig. Mind-blowing adventure, amazing heroes, despot villains, sensational pets, and non-stop action. Michael's books are always fast-paced, multi-layered, and filled to the brim with wild characters and real exotic locations mixed with the author's own brand of humor and experience. My 5* star review.⁠
The New Zealand Travellers mission did not go well with the indigenous Maori natives. They must avoid any negative media coverage as they pursue the selection of the third location. Meanwhile, the reality TV show (Hunter in Saxon England from the first Traveller mission) has reaped enormous rewards from licensed merchandise to a popular massive global audience. They decide on the Byzantine Empire Traveller mission. An amazing concept—time travel back one thousand years. So many moral dilemmas to resolve. What treasures will they find? The history, the architecture, the art?⁠
New Review-Keep Me Close by Jane Holland. A slow-burning #mediccalthriller that poses the problem of the abuse of our elderly, particularly those depending on nursing care. Procrastinating protagonist delays reporting abuse for fear of being thought the perpetrator. But something is happening to her mother and her mother can't tell her. ⁠
New Review—False Witness by Karin Slaughter. The novel includes the contemporary atmosphere of the impact of the Covid pandemic while examining each piece of the puzzle, the exploitation, the cold disengagement of the accused. Juxtaposed against the court drama is the struggle of Callie, the desperation of Leigh, and the limitations of normal public function due to the virus. I was grossed out on more than one occasion and the language was abominable. The book examines horrifically disturbing issues. While the story might be engrossing, the level of mayhem coupled with the language was over the top for me. This is my first and last book by this author. Graphic scenes, obscene language.⁠
New Review--Crossing Lines: A Spellbinding CIA Romantic Suspense Thriller by Adrienne Giordano. Elizabeth Aiken has changed her name and gone underground. A world class assassin is on her trail with a large bounty for her demise. Once made, an operative is no longer useful and the CIA has left her on her own! Thrown together by the desperate need of the young woman and her Sir Galahad, this story is very entertaining and brisk. This well-developed story will keep you on the edge of your seat 5*.⁠
New Review-Hemlock for the Holidays (A Fine Art Mystery Book 3) by Paula Darnell. Amanda Treat is getting ready for the Christmas season in Lonesome Valley. She is a fairly new resident, divorcée, and starving artist. She has a golden retriever named Laddie and a “mercurial” calico cat named Mona Lisa. Multi-focused and well-plotted, but too slow paced for me. Cozy mystery with animals, art, and the struggles for sales. ⁠