First Book Review of the Year! 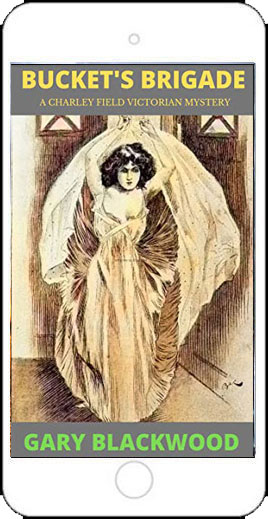 The dauntless Inspector Charley Field, protagonist of “Bucket’s List” and inspiration for Dickens’ Inspector Bucket, is relishing the newfound success of his private enquiry agency. But success isn’t all it’s cracked up to be. Instead of the minor-league mysteries he’s accustomed to–lost dogs and fake accident victims and such–he’s begun to attract some cases that are very high profile . . . not to mention dangerous.

For example, there’s the matter of Alfred Twickham, only son of railroad magnate Sir Roger Twickham. Kidnapped as a child and given up for dead, Alfred has struggled for decades to survive in the gold fields of Australia. Now he’s resurfaced in London, determined to claim his inheritance. Charley is asked to investigate the man by his friend Miss Treville, the young and attractive newspaper reporter, who claims that Alfred is an impostor and an all-round unpleasant bloke. And it begins to look as if she’s right—especially when she mysteriously disappears.

As Charley tries desperately to find her and to get the goods on Alfred, he’s sidetracked by several other troublemakers: a theatre manager who steals plays from authors (including the soon-to-be-famous Wilkie Collins); a philandering husband with a gypsy girlfriend; and an acid-throwing villain who preys on prostitutes and actresses. To make matters worse, Charley’s wife has become hooked on McMunn’s Elixir, a patent medicine that consists largely of opium.

Many of the secondary characters from the first novel make a return appearance in “Bucket’s Brigade”: the naive but eager Constable Mull; the former counterfeiter known as The Scarecrow; the alluring but untrustworthy Julia Fairweather; the winsome orphan, Audrey–and, of course, the Great Man himself, Mr. Dickens.

My first review of the year and it’s a historical fiction novel! And a douzy at that! I can’t imagine the time spent on research, but it shows.

This one gets right back into the Dickensonian era, that famous English author of the Victorian times. The former Inspector Charley Field is no longer an Inspector but head of his own private inquiry agency. He was dealing with penny-ante stuff which has now escalated into more challenging cases. And these are as widely varied as he could hope for. But are they all solvable?

Charley Field is indefinable, somewhat middle-aged, and a former pugilist. Not like he’s gotten soft, more like he’s just slowed somewhat. What we do know is that he’s in a marriage now more convenient than lusty and that he cultivated a range of contacts very helpful in his former official position. His reputation exceeds him and he doesn’t mind still being thought an inspector.

This is not the dedicated kind of mystery you might expect, but a list of pointed investigations that will keep him and his (new) associate busy, some of which pay better than others. And the stilted ole English vernacular is rather off-putting–at first. Then, for some unfathomable reason, becomes delightful and a full smorgasbord of Victorian words, sayings, habits, along with an immersive peek into Victorian London, right down to the moral attitude of the period. Charley’s alter ego, Inspector Bucket (of Dickens fame), often rules the moment. Some of the sporting activities were…GROSS (rat-baiting??!)

At conclusion, does the wily PI put more checks in the win column than the “List of Wrongdoers Who Got Away?” Ooh, there are several in that column, including the person who peddled that elixir to his wife. The dialogue is a hoot, give it a chance. The characters are not wholly fleshed. I suspect we’ll learn more in Book 3, but Charley Field is a delightful and interesting, engaging protagonist and leads a well-plotted multi-layered mystery that is sure to keep your interest. My only problem was the uneven formatting.

I received this digital download directly from the author and enjoyed the read. Recommended for any who enjoys historical fiction in a complex and unusual presentation of jargon. Among the prose, it’ll bring you a few chuckles and memorable terms and phrases along with some history. (Thinking I won’t soon forget that slap-bang was an original term for what sounds to me like fast food. Loved it!)

Crime is rampant in the late 1800s in England. Former police inspector Charlie Field opens a detective agency after leaving the police force. He is approached by young and attractive damsels in distress. They need his help to ally suspicions concerning their relationships. Add in an acid throwing maniac and you have the makings of a very entertaining novel.

Widows, some very young, are left with fortunes by older and recently deceased husbands. A remarkable group of miscreants attempt to separate them from their inheritance. One is a long-lost son who has come back from Australia to claim his birthright. Having left home at an early age it is hard to prove his actual identity.

This author handles these and a myriad of other situations in a very entertaining manner. The attempt at writing as if from a different era made parts of the book a bit tedious, however, that was overcome with a very intricate plot. It is fun to read. 4 stars CE Williams

The Author: Gary Blackwood has published 35 novels and nonfiction books for young readers and most notably The Shakespeare Stealer (Dutton) which was on the American Library Association’s list of Notable Books and Best Books for Young Adults and has been translated into numerous other languages. He only recently crossed over into adult books with Bucket’s List, the first Charley Field mystery.  I’m also a widely produced playwright.  I grew up in Pennsylvania and moved around a lot before setting down on the beautiful North Shore of Nova Scotia.

New Review-Keeping Guard (Operation K-9 Brothers Book 2) by Sandra Owens. Seal Noah Alba is on medical leave following an assignment in which he perceived the fatalities were his fault. He has been asked to participate in Operation K-9 to help with training military service dogs. Lucky will eventually win him over, but he's struggling. Master Brewer Peyton is a runaway bride. Can these two save each other? Animal fiction or romance? I thought the latter. The CE enjoyed more than I, so who's the romantic? Out now.⁠
New Review-The Memory Stones by Lewis Pennington. Forgiveness is a Journey in Time. An event during the Civil War creates an overwhelming guilt that even death can't quell. And generations hence, it still manifests in loss of memory. Can he discover the tragic circumstances that has him in turmoil and quiet the feelings? The characters are engaging, endearing, and feel real. Immersive and unputdownable. A delight in a time travel saga. His five stars.⁠
New Review-Flea Market Felony: A Cozy Mystery Novel (The Mattie and Mo Mysteries Book 1) by Tricia L. Sanders—Newly retired police chief with wife’s inherited 40’ RV off on an inaugural run. The Oldies but Goodies RV Park and Flea Market looks like it has seen better days. He's a silver fox; she enjoys shopping. Still, she would rather not do the RV thing leaving her best friend behind. Is this the way a newly retired couple should break in their rvving experience? Her first purchase at the scene of a crime? Sounds like trouble! Book 1 of a new series, out now.⁠
New Review-Aftermath by Terri Blackstock--Taylor and two of her young aspiring politician friends attend a concert just prior to the explosion at Trudeau Hall. The intricacy of the plot and the interweaving of the lives of the characters kept me glued to the pages. The conclusion is surprising and convoluted as Taylor decides to take matters into her own hands because of the death of her friends. The twists and turns kept me guessing. 5 stars - Out now.⁠
The Forever Home by Sue Watson—Released today! The building of a celebrity brand and the hidden secrets behind the façade. 25 years of marriage. Was it all a sham?⁠
Hellhound Take Me Home by Stu Lane-a CE review of #historicalfiction. A unique premise WW II saga, well written and entertaining. Ken Hazel and his platoon are overrun by the Japanese and taken prisoner back to Japan. Hitoshi Egami (Hito) is a Japanese soldier who is captured by the Aussies and taken to a prisoner of war camp where he is expected to try and escape or die. Remember our men-women of the military. Available now.⁠