A hugely enjoyable, page-turning murder mystery with one of the best and most-satisfying conclusions you’ll ever read: clever enough that you’re unlikely to guess it, but simple enough that you’ll kick yourself when it’s revealed. That’s what has made it a classic in Japan, and what readers of this first ever English translation will love too.

The members of a university mystery club decide to visit an island which was the site of a grisly, unsolved multiple murder the year before. They’re looking forward to investigating the crime, putting their passion for solving mysteries to practical use, but before long there is a fresh murder, and soon the club-members realise they are being picked off one-by-one. The remaining amateur sleuths will have to use all of their murder-mystery expertise to find the killer before they end up dead too.

This is a playful, loving and fiendishly plotted homage to the best of golden age crime. It will delight any mystery fan looking to put their little grey cells to use.

The island is a perfect getaway for 7 members of a murder solving group. Isolated from the mainland, accessible only by boat and uninhabited. A large blue mansion once stood on the island but was destroyed by fire. The only structure remaining is a decagon shaped building with seven bedding areas and a kitchen, store room and restrooms. It’s a perfect place for a group of university students to spend a week and solve some mysteries. 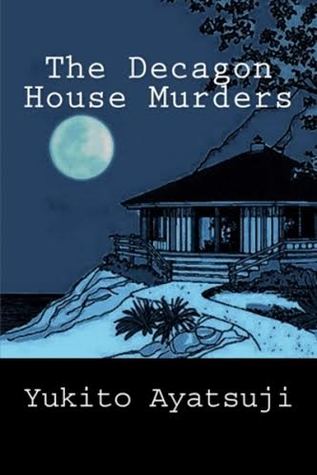 The students have taken the names of famous English mystery writers; Poe, Ellery, Orczy, Carr, Agatha, Van Dine and Leroux. Two of the students are females including Agatha and Orczy and the remaining are males. Leroux prides himself as the best of the mystery solvers. They begin the task of solving some of the worlds’ great mystery crimes. They are all fairly competitive and set out on their tasks with gusto. Except their first problem is the death of one of them. Two deaths quickly follow.

I found the read entertaining but also a bit perplexing. Why would a group of students stay on the island when even one death occurred? Each of them work individually to try to figure out who is the culprit. This was my first problem with the writing. An isolated island with someone being murdered would be the last place where I would stay. Rather than work together they individually try to solve the crimes. Who would continue to act this way when people are dying around you?

They suspect each other and lock their doors and windows and yet the murders continue. Red herrings abound as the author leads the reader down false trails. I found the overall writing to be a bit frustrating in the way the group reacted. Self-preservation dictates that an immediate distrust of everyone would prevail, certainly as the murders are not all done in the same way. This adds to the complications of solving the mystery.

I can recommend the book to those who enjoy a good puzzle. 4 stars – CE Williams

FTC Disclosure: I received a complimentary review copy of this book from the author and these are my unbiased opinions.

The Author: [Goodreads] ‘Yukito Ayatsuji‘ is the original creator of Another. He is a famous writer of mystery and Japanese detective fiction. He is also one of the writers that demands restoration of the classic rules of detective fiction and the use of more self reflective elements. He is married to Fuyumi Ono, author of The Twelve Kingdoms and creator of Ghost Hunt, Juuni Kokuki, and the author for a few other manga.

The Decagon House Murders is a milestone in the history of detective fiction. Published in 1987, it is credited with launching the shinhonkaku movement which restored Golden Age style plotting and fair-play clues to the Japanese mystery scene, which had been dominated by the social school of mystery for several decades. It is also said to have influenced the development of the wildly popular anime movement.

This, the first English edition, contains a lengthy introduction by the maestro of Japanese mystery fiction, Soji Shimada.