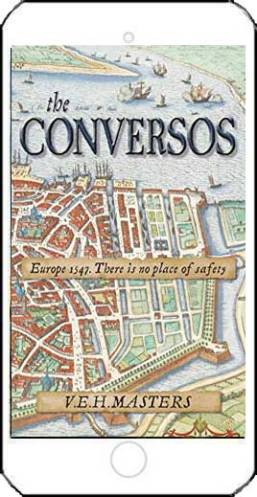 Europe 1547. The rising tide of the Reformation threatens bloody revolution. And the terror of the Inquisition grows, even for those who have converted.

Bethia, newly married tries to find her way in Antwerp, both the city and family she now belongs to a constant source of confusion – and sometimes fear. While her brother Will, enslaved on a French galley, doubts there will ever be an end to his torment.

Divided by faith, Bethia and Will each desperately seek a place of refuge from the looming maelstrom.

But there is no safe haven… unless Will denies his beliefs and Bethia surrenders those she loves.

Europe in the sixteenth century is in major turmoil. War and intrigue are everywhere and the primary areas of power are near seas. Antwerp is one of the largest and most prosperous cities in Europe. Conscripted oarsmen power boats across vast oceans. Their life is miserable and they are nearly starved to death. They must sleep on the benches where they man the oars and are not allowed to go anywhere to relieve themselves. The stench is overwhelming!

V.E.H. Masters has illuminated this era with a kind gentleness that is refreshing. Conversos are Jews who have become Christians and their children and grandchildren follow the faith. Martin Luther has been the catalyst for the schism in the Catholic church and whole countries are being torn asunder by the battles.

Bethia has married a citizen of Antwerp and has joined him in his new home. She is conversant in a number of languages but her first is Scottish. Her husband Mainard is a loving provider and she is moved into his parents’ house. They are very wealthy and she is swept up in a new life. Her brother Will, in the meantime, has been subscripted into service as an oarsman on a French merchant vessel.

The metamorphosis of religions is intriguing and well portrayed. Lives and fortunes are lost based upon the religion one professes. The rise of Adolf Hitler is certainly not the first European conflict affecting Jews in Europe. This tale features a similar pressure on the Jewish community and their involvement in manufacturing and trade. Someone declaring you are Jewish can result in your fortune and livelihood being taken away and your expulsion from the country.

I found the fortunes of a young Scottish lass both fascinating and enlightening. Mass extermination was not the problem but expulsion from many countries and confiscation of all their worldly possessions could result in starvation. Third-generation Christians would not separate the families from their Jewish roots. The result is an eye-opening and intriguing glimpse into life during the Middle Ages. 5 stars – CE Williams

Although you could read this as a standalone, it is considered a sequel to The Castilians which we read and reviewed last year and also greatly enjoyed. We received a complimentary review copy of this book from the author that in no way influenced this review. (These are his honest opinions.)

The Author: VEH Masters was born and grew up on a farm just outside of St. Andrews in Scotland. She’s been fascinated by the siege of St Andrews Castle ever since her history teacher took the class on a visit, which included going down the siege tunnel dug out of rock and peering into the bottle dungeon where Cardinal Beaton’s body is said to have been kept, pickled in salt, for over a year.

When she learned that the group who took the castle and held it for over 14 months, resisting the many attempts to re-take it, called themselves the Castilians, she knew even then it was the perfect title for the story.

The sequel, The Conversos, which picks up to the hour where The Castilians left off, continues the dramatic adventures of Bethia and Will. To find out more please go to her website https://vehmasters.com/ and she would be honoured if you signed up for the newsletter.

The Castilians is now available as an audiobook on Audible, narrated by the talented actor and voice artist Beverley Wright.