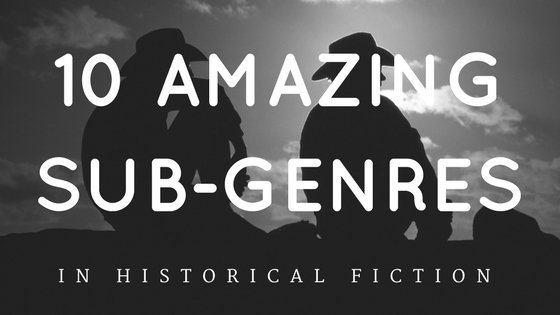 Historical Fiction as a literary genre is generously broad and notoriously ambiguous in that the beginning of man can be included in the same spectrum of writing as our own recent Wild West. It was bound to happen then that sooner or later sub-genres would be broken out.

In that it depicts and closely associates the period’s social conditions, manners, clothing, and environmental factors, the story can capture any century or millennia from the dawn of man. Generally, “historical” refers to publications written at least 50 years after the event. Considering an extended time frame, therefore, an author would usually be assumed to be writing from research rather than from experience. (In the relatively unusual case of my grandfather’s manuscripts, however, they were written some time shortly after his “sailing, mining, prospecting, and cowpoke days,” over 90 years ago but only recently published by myself.)

So if it’s all historical fiction, what are the ten sub-genres?

Among the earliest historical fiction was Classical Greek, whose novelists wrote what might even be considered “epic poetry,” including The Iliad. There is a wealth of stories beginning 500 AD considered Middle Ages, then successively through the Early Modern Period from 1500 to the Napoleonic and recent history beginning approximately 1850. The protagonists or characters may be fictional characters of the time or well-known figures of history–or a mix of the two.

Early in 2017, I read The Eye of Nefertiti by Maria Luisa Lang. But this was not just a historical fiction saga–it included elements of historical fantasy (see #6 above). One of my favorite authors, Amanda Hughes, writes historical fiction with a sprinkle of romance (see #4 above). 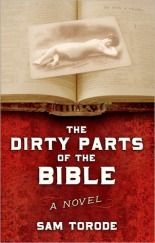 And then there was The Dirty Parts of the Bible by Sam Torode (set during the depression), also a 2016 Goodreads Choice Award (I loved that book!), considered Historical Literary Fiction. I reviewed So Much Owed by Jean Grainer set during WW2 (definitely #4 above) that was a favorite of 2017.

In the case of my grandfather’s manuscripts, of course, he wrote about the period approximately 1882 – 1935. Stanley McShane’s literary hero was Jack London, his contemporary and also early 1900 San Francisco resident. (Both men survived the 1906 San Francisco earthquake.)

Jack London is famous for his historical fiction novels, The Call of the Wild and White Fang, set about the same period as McShane’s Busters of Bitter River.

For that novel, McShane lived on a cattle ranch in Arizona for some time and learned to rope, drive cattle, and generally be a “cowpoke.” Both London and McShane visited Goldfield, Nevada, where mining stocks were being touted and later noted in McShane’s book, Hot Air Promotions. (It would seem a possibility they crossed paths more than once.)

The history of man even in just the last century lends itself to so many wonderful ideas, historical plots, characters, and colorful stories. According to the Historical Novel Society, approximately “40% of all (historical) adult novels reviewed over the latter part of 2017 were set in the 20th century.” Indeed, according to the same source, the 19th-century stats drop to little more than half of the 20th century. (The why is another whole article.)

Historical fiction was listed among the eight most popular genres. (You can no doubt guess what is #1.*) However, try as I might, I could find no current breakdown of popularity by genre with any source that agreed with another. However, it would appear that in 2022 the genre might have dropped to #10 with new categories gaining traction in the upper ten. Perhaps you have a definitive source, or link to answer the question. I’d sure love to see it! ©2017 Virginia Williams

New Review-Hang the Moon by Jeannette Walls. Down home literary spice fiction of life in the mountains of Virginia back in booklegging days. Strong female protagonist—great characters. Well-paced and gripping. A period piece that put you in the middle of it. The roaring twenties, a crazy time--flappers and speakeasies--and prohibition.
New Review-Devil’s Way by Robert Bryndza-Kate Marshall Book 4. The author writes an engaging tale of the loss of an only child, the frustration of anyone who has a missing child. A little one can disappear in the blink of an eye. Long after the searches are over, a mother still can't let it go. Perhaps the detective agency of Kate Marshall can figure out what happened? A CE review.
New Review-Clive Cussler The Sea Wolves by Jack Du Brul. The beginning of WWI prior to the US involvement--still much going on behind the scenes. The author ties his story into the sinking of the Lusitania, which sounds like believable, historical fiction. Interesting incite into WWI technology.
New Review-Books 2 and 3 of the Mitzy Moon Mystery series, Tattoos & Clues and Wings & Broken Things. Too fun cozy mystery with elements of the paranormal, amazing diversity of characters and the ghosty element. I enjoyed Book 2, but it was Book 3 and the character development that sealed this series as being one of my new favs. Fast, snarky reads. I'm looking for my next book in this series.
The Sandcastle Hurricane by Carolyn Brown. A feel-good Hallmark-type novel for the upcoming holiday season. A variety of damaged and aged characters come together to wait out and survive a hurricane and find peace with each other and those they loved.
New Review-The Nature of Things (Finley O’Sullivan Book 2) by Debra Webb. Finley O’Sullivan and her cohorts create a private investigation agency. Things turn deadly when she digs into the Winthrop murder. Wayyy deadly. A CE review.