I became a solid and enthusiastic fan of Michael Reisig after reading “Brothers of the Sword/Children of Time.” The swashbuckler reaches back into time and secures and hides the treasure that following the split of the book into the Caribbean Gold series became “The Treasure of Tortuga” and “The Treasure of Time.” (Additionally, there is a third in the Caribbean Gold series.) The way this author reaches back into time and places you square in the middle of the action is riveting.

In the meantime, I’ve been privileged to become one of his pre-readers, a beta reader of the Key West series of novels, and with this, the 7th in the Road to Key West series, his characters remain those steadfast, but true, robust men brought forward with the same kind of spirit as the former.

In “A Far Road to Key West” the plot continues with our adventuresome 80s heroes Kansas Stamps and Will Bell on their way back to Guatemala. (I hope you didn’t miss series 6, which began with the powerful prologue that revealed the story of the hidden treasure of the infamous Mayan ruler, Nachán Can!) Now Will and Kansas and our favorite “Hole in the Coral Wall Gang” are on their way to retrieve the golden treasures they were forced to previously leave behind.

Fortunately, even if you did miss #6, it is not necessary to pick up the thread in the 7th of this amazing series. Among our favorite returning characters are Travis and Crazy Eddie, that wacky one-of-a-kind ‘Nam pilot, and the beautiful Talia and Santino are back along with Talia’s mute brother, Benji (from series #6). Juan Demintos and Sego Trupo add uproarious comic relief while our heroes fight civic disobedience, a vengeance bent Guatemalan colonel, and crazed WW2 Nazi survivors.

The normally capable Benji has gotten himself into serious trouble mainly by being incapable of speaking. Now he’ll likely face death in the corrupt, prisoner run Granja Penal de Pavón (which is REAL, btw), located outside the town of Fraijanes near Guatemala City. Description of the prison paints a grim picture of a prison run by the prisoners themselves.

Reisig weaves a frantic, fast-paced narrative as he deftly includes the clueless Juan and Sego (with dialogue you’ll swear he secretly recorded), while Colonel Strata provides grist for the mill.

Reisig infuses the guys, as always, with a strong moral code, the bond of friendship borne of dangerous but victorious adventures, and the gift of bestowing some treasure to the masses (and Reisig always finds a way to share), while managing to salvage “just enough” for our hapless heroes. It’s the “how” that Reisig provides to successfully manipulate the plot while it steams full throttle into one twist after another. These multi-plotted novels provide more than one successful highlight and these sensitive and empathetic characters get under your skin.

Some series begin to wane in interest with each successive entry; not the Key West series, which just seems to get better, more complicated, and deeply plotted, with the addition of fascinating new characters in each new publication.

I appreciate the opportunity to read for the review and once again must enthusiastically recommend to all looking for non-stop, breathtaking action with seriously fully fleshed characters. 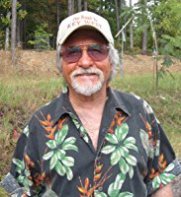 The Author: Michael Reisig has been writing professionally for 20 years and it shows. He is a former Caribbean adventurer turned best-selling novelist, who claims to have been thrown out of more countries in the Caribbean Basin than most people ever visit. You write what you know! Yes?! After high school and college in Florida, he relocated to the Florida Keys and obtained a pilot’s license along with establishing a commercial diving business. He used both to travel throughout the southern hemisphere, diving, treasure hunting, and adventuring. He now lives in the mountains of Arkansas, hunting, fishing, and writing, although he still escapes occasionally to the Caribbean, perhaps to glean his next adventure! ©2017 Virginia Williams