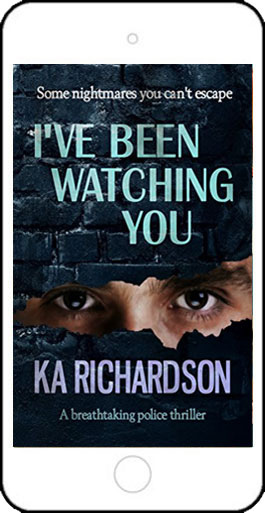 Title: I’ve Been Watching You by K A Richardson

Title and Cover: I’ve Been Watching You (The Forensic Files Book 1) – Appropriate setting for subject

Ben Cassidy is a CSI with Sunderland City who is raising four-year-old daughter Grace by herself. She lives with Aunt Aoife who took her in as a child when her parents died in an accident. She has moved back home after living in Dunham and brings with her baggage she is yet to completely resolve. She must wrestle with the lingering psychological and physical damage while Aunt Aoife has a secret of her own.

Jacob Tully is ex-military with experience in combat and physical and mental trauma, but is coping by lecturing in Digital Forensics when Ben attends a class as part of her continuing education. He still wrestles with an occasional flashback or bout of PTSD, though has been making progress. The IUD damage to his leg will continue to cause him pain. Both are damaged individuals and seem destined to find each other.

When a local homicide involving a student is executed in a manner that Ben recognizes, it immediately causes horrific flashbacks of her own. But that’s not all…oh no, cause we have a parallel baddie out there who has a wife in a nursing facility as a result of his violence against her, both physical and mental. Unfortunately, he has a young boy at home, trying to raise him as he believes a **real** man should be raised. To all outward appearances, they look like a normal family, coping when she is sent to a long-term care facility. Meanwhile, he is crafting the end to his wife’s caregiver.

Author Richardson has taken on a violent subject and written her storyline from the viewpoint of the CSI’s rather than the police investigation or detectives usually assigned the case. In this case, both Ben and Jacob are closely associated and working with the police, making for a quasi-police procedural. This might well also border on a psych-thriller as it bounces back and forth between both antagonists as often as the protagonist, Ben, giving us insight into the mind of the two truly dangerously deranged psychopaths. Both perps are convinced of their superior intelligence and proceed with only the tiniest niggle that there might be some small piece of forensic evidence they might have overlooked.

The first perp has a manic habit of searching, following, and spying on his next victim until he is assured of the perfect time and place where he can quietly, sadistically fulfill his fantasies. He assures that he won’t leave his future victim alive as happened accidentally with Ben.

The book begins with a prologue of the scene that leaves Ben permanently scarred some eight years prior. It grabs attention and proceeds to feed you into her story at the same time as the reader is introduced to both antagonists and Jacob. The plot manages to hold interest while becoming more confusing and somewhat inconsistent. Female characters with male names, so many English slang terms, colloquialisms and vernacular (“headed back to the nick,” “crack on”…), awkward phrasing (“…using the wall behind him to support for his weight,” “I was stood on the landing,” “Always asks if I want milk getting.” Huh??), and typos.

The characters are not wholly fleshed and I had difficulty with Ben being a sympathetic character. The dialogue is awkward. The romance promoted between these two damaged characters did little to give me any warm fuzzies. Fortunately, there is not a lot of objectionable language and scenes are depicted sufficiently that your own imagination takes over and that’s bad enough. The conclusion came in as expected but then left you with a catastrophic cliff-hanging twist at the end that left you scratching your head and feeling cheated.

I was granted this download by the publisher and NetGalley and appreciated the opportunity to read and review. This might be recommended to those who enjoy dark, psychopathically involved police procedurals with heavy English slang. The blurb sounded interesting, albeit a little misleading. Sorry, I’ll not be reading another.

The Author: K. A. Richardson (No author bio available.)

10 thoughts on “I’ve Been Watching You – a #BookReview”

New Review-This Much Huxley Knows-A Story of Innocence, Misunderstandings and acceptance by Gail Aldwin-The innocence of youth runs headlong into the wisdom of parents. The story is replete with suspicion and innuendo. The manipulation of words by this young wordsmith make the reading fun and amusing. I highly recommend it. 5 stars - CE Williams. A story of a 7 y/o boy solving the mysteries of his life. Sweet, contemporary story.⁠
New Review-Murder in Connemara (A Home to Ireland Mystery Book 2) by Angela M Sanders. Tara Meehan moved back to her mother’s childhood home in Galway. She is very busy trying to get her salvage shop open, along with the warehouse, but is impatiently awaiting her permit. She is becoming a part of the community ad trying to progress in her relationship with Danny. ⁠
New Review-The Perfect Ending by Rob Kaufman. Can this author truly go out with a bang or a whimper? It’s dark, delightfully deceiving, and emotionally wringing. Fully fleshed characters you’ll love (the MC not so much)! Gripping, page-turning thriller. Sure to keep you guessing to the end. And then that twist. OMG! This is one not to miss! My 5* review.⁠
#audiobook review-His & Hers by Alice Feeney. Insanely gripping, creepy, spicy narrative. Three POVs; his, hers, and the killer. Fast paced, well-plotted, creepy narrative spiced with hometown-childhood secrets, adult secrets. Twists and turns leave the listener spinning. This novel-audiobook totally envelopes the listener, sinister, gripping, full of suspense. And that twist at the end? Gotcha!⁠
New review-Seven-Year Witch (Witch Way Librarian Mysteries Bk 2) by Angela M Sanders. Josie just discovered she’s a witch! She’s learning about her powers through letters from grandma. Engaging characters, including her kitty, Rodney. There is high drama, perceived curses, twists, turns, and torment over the situation with Sam. Entertaining narrative. ⁠
TV Netflix Series Outlander vs #Audiobook by Diana Gabaldon—Was the TV version true to the original books? And which do you prefer? How many seasons are available—will there be another? Some of the questions you've been burning to have answered. Are you a fan and find this truly bingeworthy? What is it that is so compelling? The action-adventure, the time travel, the characters? Or Claire and Jamie? Have you read one of the books? (Hang in there--they are long and sometimes graphic.) I discuss both the #Netflix version and the audiobooks. Mercy.⁠