Thirteen Steps to the Cellar. They were steep; they were narrow—but was a fall down them enough to have caused the twenty-seven deep lacerations to her aunt’s head?
Callie Harris travels from her home in Alabama to her aunt’s former mansion in Maine to unravel the haunting forty-year-old mystery of Dr. Laverne Harris Doss’ brutal death.
Why wasn’t a murder weapon found? Was her uncle justly convicted of the killing? Was his mistress involved? Or was the murderer the bearded stranger rumored to have arrived by train that night?
In the charming town of Richmond, located on the banks of Maine’s historic Kennebec River, Callie uncovers the community’s darkest secrets—a botched police investigation, a betrayed widow’s lie, a dead woman’s blackmail, and a wealthy philanthropist’s shame. The web of intrigue extends far beyond her suspicions and its connection to her personal story pierces Callie to her core. 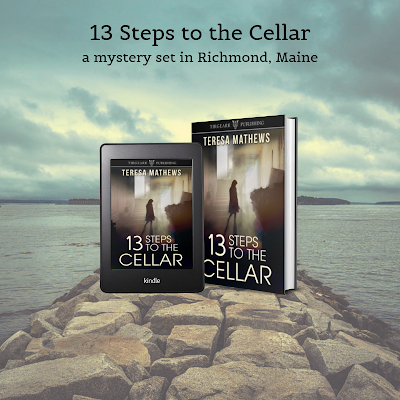 TERESA MATHEWS is a graduate of The University of South Alabama.  She’s a member of the Mobile Writers Guild and serves on the Board of Directors for the Alabama Nursery and Landscape Association.
An avid gardener and artist, she has multiple book covers to her credit. Several years ago after visiting the site of her real-life aunt’s murder, Teresa discovered a third passion–storytelling. Although inspired by an actual tragedy, Thirteen Steps to the Cellar is fiction.
Raised on the Gulf Coast, Teresa, her husband, and son now live on a farm with a second home on the sparkling white sands of Fort Morgan, Alabama. This is her first novel.
Contact Links
Website
Facebook
Instagram
Goodreads
Amazon Author Page
Publisher Author Page
Purchase Links
Amazon
US
UK
CA
AU
Barnes and Noble
Kobo
Smashwords
Publisher Buy Link

Thank you for reading! I’d love your clicks, comments, and critique. Approve the presentation?