It’s March and I’m participating in the Reading Ireland Month for 2019. This one is a crime fiction by Dublin born Irish author John Connolly. Because of the length of this and another that we borrowed from our local library, my associate reviewer read Dark Hollow and the following is his review.

Charlier Parker, a former New York City detective with a haunted past, befriends a down-and-out mother with a small child. When she turns up dead, Charlie’s first suspect is her estranged husband. Charlie follows the man’s trail to Maine and there he becomes entangled in a series of strange occurrences which all seem to harken back to a string of unsolved murders that took place generations before. The murders were never solved and now Charlie must hunt for a killer and the connection between two crimes that span a century. 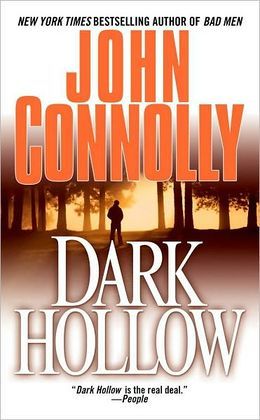 Extremely dark crime noir may not be everyone’s cup of tea. Charlie Parker is a former police officer turned private detective haunted by the death of his wife and daughter. The overall plot moves slowly, developing into a harsh reality of Charlie’s life. Overall the book is well written and keeps engagement but is brutal in the reality of catching the killer.

Subplots of harrowing psychological events imposed upon the reader by a mother who basically hated her husband and her child results in diabolical events. Add the mob on a ruthless quest to recover two million dollars and nobody is safe. Brutality at every turn left me wishing for a little peace in detective Parker’s life.

I felt the book could have matriculated quicker with less exposure to a ruthless killer of young women. It quelled my thirst to visit the far corners of Maine. Two generations of Parkers finally solve the mystery but at a horrendous price. Part of a series but could function as a standalone. Well-plotted but a little slow and long for me. C.E. Williams 4/5 stars

The Author: [John Connolly] I was born in Dublin, Ireland in 1968 and have, at various points in his life, worked as a journalist, a barman, a local government official, a waiter and a “gofer” at Harrods department store in London. I studied English in Trinity College, Dublin and journalism at Dublin City University, subsequently spending five years working as a freelance journalist for The Irish Times newspaper, to which I continue to contribute, although not as often as I would like. I still try to interview a few authors every year, mainly writers whose work I like, although I’ve occasionally interviewed people for the paper simply because I thought they might be quirky or interesting. All of those interviews have been posted to my website, http://www.johnconnollybooks.com.

I was working as a journalist when I began work on my first novel. Like a lot of journalists, I think I entered the trade because I loved to write, and it was one of the few ways I thought I could be paid to do what I loved. But there is a difference between being a writer and a journalist, and I was certainly a poorer journalist than I am a writer (and I make no great claims for myself in either field.) I got quite frustrated with journalism, which probably gave me the impetus to start work on the novel. That book, Every Dead Thing, took about five years to write and was eventually published in 1999. It introduced the character of Charlie Parker, a former policeman hunting the killer of his wife and daughter. Dark Hollow, the second Parker novel, followed in 2000. The third Parker novel, The Killing Kind, was published in 2001, with The White Road following in 2002. In 2003, I published my fifth novel – and first stand-alone book – Bad Men. In 2004, Nocturnes, a collection of novellas and short stories, was added to the list, and 2005 marked the publication of the fifth Charlie Parker novel, The Black Angel. In 2006, The Book of Lost Things, my first non-mystery novel, was published.

Charlie Parker has since appeared in five additional novels: The Unquiet, The Reapers (where he plays a secondary role to his associates, Louis and Angel), The Lovers, The Whisperers, and The Burning Soul. The eleventh Charlie Parker novel, The Wrath of Angels, will be available in the UK in August 2012 and in the US in January 2013.

The Gates launched the Samuel Johnson series for younger readers in 2009, followed by Hell’s Bells (UK)/The Infernals (US) in 2011. A third Samuel Johnson novel should be finished in 2013.

I am based in Dublin but divide my time between my native city and the United States, where each of my novels has been set.

New Review-Such a Beautiful Family by T R Ragan. Where did Jane come from? Where did she get the money for her start-up? Twice the money, more time with her family. Who can pass that up? Not Nora. But something starts going sideways very quickly. Something is wrong. Will Nora finally have to confront the secret she's held from everyone--including her husband? Currently on pre-order.
New Review-The Final Hunt by Audrey J Cole. Did the man really die in a bear attack? If he didn't, where is he? Set in the Pacific Northwest and Alaska, the settings become believable and spectacular.
New Review-The Last Sentinel by Simon Gervais, a Clayton White Book 2. The growth of America’s enemies in the area is growing exponentially as more families mourn the death of fathers, brothers and other loved ones. Vengeance grows strong in these brothers; they’ll not stop until they have retribution. This well-developed plot leads to very interesting places and conclusions. The author keeps the action fast-paced and the dialogue entertaining. His writing expands the lengths that personal torture and vengeance can go. A CE review.
New Review-Holy Chow by David Rosenfelt. An Andy Carpenter Mystery Book 25. Always a special treat, especially an audiobook narrated by Grover Gardner. Will the Chow have a home or the owner go to jail? There is a reason why this series is a fan favorite. The dogs, the characters, the mystery, but first that wacky sense of humor, the snark. Love it all. Attorney Andy Carpenter always sweats them in, but has he lost one yet? Has he?
New Review-The Wedding Plot by Paula Munier. A Mercy and Elvis Mystery Bk 4. Mercy with her Belgian Malinois has been recruited by her mother to fill in for the missing spa director at her grandmother’s wedding. But Mercy might need a little support from #1 guy, Troy Warner and his rescue Newfoundland mix. The whole family on both sides are in attendance for the exclusive destination wedding. And that's the problem.
New Review-I Remember You by Brian Freeman. The author engulfs our heroine in ever-evolving thoughts! How could she know places she had never been or people she had never met? She began to suspect that her memories were not her own but those of Skye. As the book evolves, two personalities become intertwined. The author provides a glimpse into personality disorders and the futility of some finding peace. A CE review.