Renee began the Throwback Thursday meme on her blog, “It’s Book Talk” to share some of her old favorites as well as sharing books published over a year ago. Sounded like a good reason to join! My TT posts will not come from current ARCs or new releases. Means I’ll be going back over some of my oldies but goodies, some of my favorite stories and authors you might not have previously experienced. Hopefully, you’ll find either a story or author that interests you and you’ll check them out!

“The Treasure of Tortuga was originally published in 2001 as the first half of a novel called Brothers of the Sword/Children of Time.” It was my introduction to the author Michael Reisig and I’ve been a fan ever since. With encouragement from his friends, Reisig rewrote and republished the original novel split in volumes. The Treasure of Tortuga became Volume 1 of the series called Caribbean Gold.

Volume 1 of the Caribbean Gold series

“The Treasure of Tortuga draws you into an era of dark-hearted men, captivating women, and a seafaring adventure so real you’ll taste the salt spray. The year is 1668. Englishman Trevor Holte and the audacious freebooter Clevin Greymore, sail from the Port of London for Barbados and the West Indies. They set out in search of adventure and wealth, but the challenges they encounter are beyond their wildest dreams…some treasures outlive the men who bury them…”

Volume 2 of the Caribbean Gold series

The Treasure of Time – “In the spring of 1980, three adventurers set out from Key West in search of a lost treasure on the Isle of Tortuga, off the coast of Haiti. Equipped with an ancient parchment and a handful of clues, they embark on a journey…discover the power of friendship and faith, and the unflagging capacity of spirit, and come to realize that, some things are forever…”

Volume 3 of the Caribbean Gold series

The Treasure of Margarita – “Historical and modern adventure, sizzling romance, and Caribbean intrigue… The Treasure of Margarita spans three centuries of high adventure. Beginning in 1692, in the pirate stronghold of Port Royal, it carries the reader across the Southern Hemisphere in a collage of rip-roaring escapades. Then it soars forward five generations, into modern day intrigue and romance in Key West and the Caribbean. A staggering fortune of Spanish black pearls and a 300-year-old letter with a handful of clues set the course that Travis Christian and William Cody embark upon. But it’s not an easy sail…” 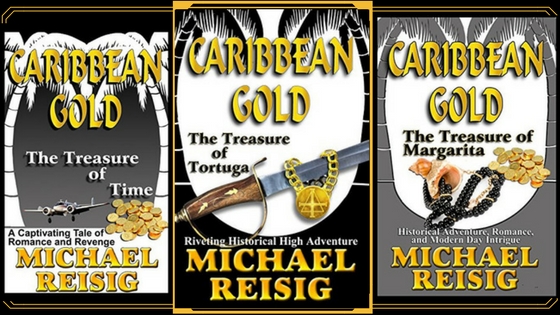 Irresistibly drawn to tales of treasure hunting, swashbuckling pirates, sailing ships, their courageous crews and the bawdy women who entertained them, I discovered “Brothers of the Sword/Children of Time” written by Michael Reisig in 2001. Envisioning a modern day Stanley McShane, off on another adventure, I witnessed my grandfather’s travels again through Reisig’s historical 17th century multi-masted sailing craft, experiencing much of the same kind of treasure hunting in the Caribbean, as did my grandfather in the South Pacific more than a century later.