Title: The Star and the Shamrock

Title Link: The Star and the Shamrock

Ariella Bannon has no choice: she must put her precious children, Liesl and Erich, on that train or allow them to become prey for the Nazis.

When her husband doesn’t come home one day, Ariella realises that the only way she can ensure her children’s safety is to avail of the Kindertransport, but can she bear to let them go?

A thousand miles away, Elizabeth Klein has closed herself off from the world. Losing her husband on the last day of the Great War, and her child months later, she cannot, will not, love again. It hurts too much.

But she is all Liesl and Erich Bannon have.

Thrown together in the wild countryside of Northern Ireland, Elizabeth and the Bannon children discover that life in the country is anything but tranquil. Danger and intrigue lurk everywhere, and some people are not what they seem. 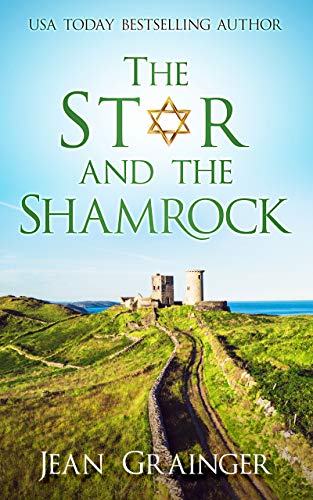 It is a testament to just how well the author spins a story as each has such charm, is independent, and brings to the forefront information you may never have been aware of that spans humanity with a direct impact.

In The Star and the Shamrock, we are privy to the story of Elizabeth Klein, living in London, who defied her Catholic mother to marry a Jewish man who was shortly killed in the Great War. With her grief, she also lost their child shortly thereafter. It is to the credit of a sympathetic nun that it was recommended she get her teaching credential. She never returned to the beautiful Irish countryside of Northern Ireland or to her mother or the home she grew up in.

Living in London with everyone facing yet another war, she receives a plea from a distant cousin’s wife in Europe, begging her to receive their two children. Ariella Bannon’s husband disappeared after coming to the aid of a Jewish woman and she realized will likely never come home. She is desperate to get her children to safety and successfully navigated the channels to get her children on the Kindertransport–but hopes a relative can receive them.

It is not long after they are safely delivered to her home in London that the city is being bombed, including her home and the school where she taught. Her mother had passed away the previous year, leaving her childhood home her own recourse and it is in Ballycregggan, County Down, where she opens her spacious and comfortable childhood home to Liesl and Erich Bannon. Elizabeth shortly realizes there is a “farm” where many other Jewish Kindertransport children have been sent and they have need of a teacher. It is there she meets many support characters, all of whom are well-fleshed and most sympathetic. She also meets Daniel Lieber, a mechanical engineer, also a Jewish refugee, taking on odd mechanical jobs at the school to help keep it running.

The well-plotted storyline takes on a number of issues, particularly describing a war-time existence, suspicion, love and support or distrust. Elizabeth is thrilled to be a “mother” and does an admirable job at the Farm, gradually learning that children are underestimated in their understanding of a situation. It’s a dark time in our history, but love trumps race or language barriers and there are times when people rally together for the good of all.

As always, Ms. Grainger plucks at your heartstrings with lovingly developed opposing characters, believable dialogue, and tension that pulls you toward what could be a tragic conclusion or the happy ever after. Still, this is war–and you never know.

I was allowed an advance reader copy by the author for a read and review and was absolutely delighted to be counted among those so privileged. How do people survive in these circumstances? The human spirit is amazing! Recommended for any who enjoy good literary fiction, historical fiction, and those behind the front line war scenes that should also be acknowledged for their heroics.

SELECTED BY BOOKBUB READERS IN TOP 19 OF HISTORICAL FICTION BOOKS.

WINNER OF THE 2016 AUTHOR’S CIRCLE HISTORICAL NOVEL OF EXCELLENCE

Hello and thanks for taking time out to check out my page. If you’re wondering what you’re getting with my books then think of the late great Maeve Binchy but sometimes with a historical twist. I was born in Cork, Ireland in 1971 and I come from a large family of storytellers, so much so that we had to have ‘The Talking Spoon’, only the person holding the spoon could talk!

I have worked as a history lecturer at University, a teacher of English, History and Drama in secondary school, a playwright, and a tour guide of my beloved Ireland. I am married to the lovely Diarmuid and we have four children. We live in a 150 year old stone cottage in Mid-Cork with my family and the world’s smallest dog, a chi-chon called Scrappy-Do.

My experiences leading groups, mainly from the United States, led me to write my first novel, ‘The Tour’….The sequel to The Tour, called Safe at the Edge of the World, follows Conor O’Shea once again as he takes another motley crew on a tour of Ireland…The third Tour book in that series is called The Story of Grenville King and in it Conor gets an opportunity to renovate and run an old castle as a five star resort, but something isn’t quite right, and the castle has many secrets…The fourth Conor O’Shea book is called The Homecoming of Bubbles O’Leary and features a group of friends taking their friend Bubbles home to Ireland from New York, on last time.

My first World War 2 novel, ‘So Much Owed’ is a family saga based in Ireland following the Buckley family of Dunderrig House…The history of the period was my academic specialty so I’m delighted to be able to use it in a work of fiction. I released a second WW2 book, called ‘What Once Was True’ earlier this year and so far people seem to really like it.

Shadow of a Century, is set in New York in 2015 as well as in Dublin during the events of Easter Week 1916…The story features three very strong women, united through a battered old flag. Its essentially a love story, but with a bit of intrigue thrown in for good measure.

Under Heaven’s Shining Stars, was published in 2016 and is set in my home city of Cork.

My next book, What Once Was True, tells the story of a big old house in Co Waterford during WW2. Two families live there, the impoverished Keneficks who own it and the hard-working Murphys who work for them. Life has remained unchanged for centuries but when war comes, it means everything changes and people have to question what once was true. This book was selected by Bookbub readers as in the top 19 Historical Fiction books of 2018. The sequel to this, Return to Robinswood, continues the story.

Many of the people who have reviewed my books have said that you get to know the characters and really become attached to them, that’s wonderful for me to hear because that’s how I feel about them too. I grew up on Maeve Binchy and Deirdre Purcell and I aspired to being like them. If you buy one of my books I’m very grateful and I really hope you enjoy it. If you do, or even if you don’t, please take the time to post a review. Writing is a source of constant contentment to me and I am so fortunate to have the time and the inclination to do it, but to read a review written by a reader really does make my day. {Note: Bio truncated in the interest of space. See her full bio here.]