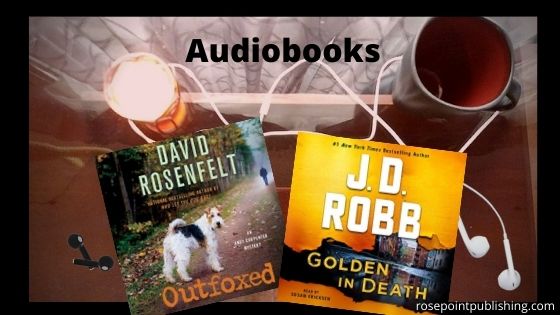 Gotta temper the heavy with the light audiobooks and last week I enjoyed both. Here is a quick summary of Outfoxed released in 2016 by David Rosenfelt and Golden in Death released last February (2020) by JD Robb.

Book Blurb: Golden in Death An Eve Dallas Novel (In Death, Book 50) by JD Robb – In the latest thriller in the number-one New York Times best-selling series, homicide detective Eve Dallas investigates a murder with a mysterious motive – and a terrifying weapon.

Pediatrician Kent Abner received the package on a beautiful April morning. Inside was a cheap trinket, a golden egg that could be opened into two halves. When he pried it apart, highly toxic airborne fumes entered his body – and killed him.

After Eve Dallas calls the hazmat team – and undergoes testing to reassure both her and her husband that she hasn’t been exposed – it’s time to look into Dr. Abner’s past and relationships. Not every victim Eve encounters is an angel, but it seems that Abner came pretty close – though he did ruffle some feathers over the years by taking stands for the weak and defenseless.

While the lab tries to identify the deadly toxin, Eve hunts for the sender. But when someone else dies in the same grisly manner, it becomes clear that she’s dealing with either a madman – or someone who has a hidden and elusive connection to both victims.

My first experience with this series and it was an eye-opener. I was astounded to realize this is Book 50. ACK! Fifty of these? Starting in 1995? And this is supposed to take place in 2061? Really! Somehow, I totally missed that.

I love getting into a unique premise and, for me, it was unique and well-plotted and I kept either my earbud or the wifi speaker handy. I can’t speak, obviously, to Eve’s evolving dynamics—her relationship with slobber-worthy Roarke.

You may remember I read Hideaway by Nora Roberts (I’m not sure which is the alter-ego) and found it a little syrupy. This series (and J.D.) alternates between offering slightly lighter scenes of banter or situation to downright serious and deadly scenes punctuated with profanity. While the other, of course, is a romance novel, this one would be classified as a near future police procedural. (Damn—I really never got that they’d progressed much further than they are today.)

The body count begins to escalate while the interviews become more intensive lending a stark tension to the narrative. Eve and her partner Detective Delia Peabody pursue leads, hit a brick wall, go around it, and find another lead. There are twists. It’s complex, compelling, and entertaining. Narration kept interest. The conclusion satisfying. 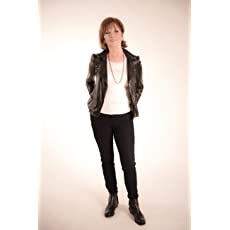 The Author: J.D. ROBB is the pseudonym for #1 New York Times bestselling author Nora Roberts. She is the author of over 200 novels, including the futuristic suspense In Death series. There are more than 500 million copies of her books in print.

Book Blurb: Outfoxed by David Rosenfelt – Defense lawyer Andy Carpenter spends as much time as he can working on his true passion – the Tara Foundation, the dog rescue organization he runs. Lately Andy has been especially involved in a county prison program where inmates help train dogs the Tara Foundation has rescued to make them more adoptable, benefiting both the dogs and the prisoners.

One of the prisoners Andy has been working with is Brian Atkins, who has 18 months left on a five-year term for fraud. Brian has been helping to train Boomer, an adorable fox terrier the Tara Foundation rescued from a neglectful owner. Brian and Boomer are clearly a terrific match. In fact Andy hopes that Brian will adopt Boomer himself, once his sentence is up.

But one day Andy arrives at the prison to discover that Brian has used Boomer to make an ingenious escape, and man and dog are both in the wind. The next day the man on whose testimony Brian was convicted is found murdered. Brian is caught and arrested for the crime, though he forcefully asserts his innocence.

Suddenly Andy finds himself with a new client in Brian and a new dog in Boomer. And as he starts to dig deeper into the murder and the events leading up to it, Andy realizes he might be putting them all in far more danger than anyone had realized.

No, I don’t wish to hammer you over the head with books by David Rosenfelt. Really, my major go-to by him is the Andy Carpenter book series.

I have read a number of his other books, but for fun, fast, and fascinating legal two-step courtroom drama, I return to the Andy Carpenter series. They are clean and comfortable with a cast of support characters that seldom vary with the exception of the reason for the current mystery.

Andy is a well to do attorney (not all of it money from his cases), his wife Laurie, son Ricky, Willie, Marcus, and Hike. Each a force of their own. It’s a familiar and winning formula. Andy doesn’t want the case but feels the guy (or gal) is innocent.

Get dangerously close to be taken out (enter bad guys),

Did I leave something out? Yes, usually the beginning sets the stage for the plot which always sets a hook, grabs your interest and promises to be highly entertaining. And, of yes, he begins with those same self-deprecating remarks and cheerful scenes to the setting, players, and his two dogs, Tara and Sebastian. It’s not a K-9 series per se—it’s a legal thriller mystery series with a snarky attorney who loves dogs enough to set up a rescue with Willie (see above). The narrator, Grover Gardner, btw, is absolutely perfect. Nails it!

And I never fail to enjoy each and every one, a few of which are listed here: Silent Bite, Muzzled, The Twelve Dogs of Christmas, Rescued. 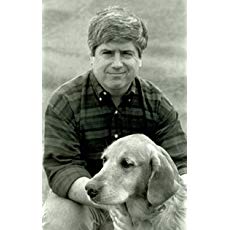 The Author: David Rosenfelt, a native of Paterson, New Jersey, is a graduate of NYU. He was the former marketing president for Tri-Star Pictures before becoming a writer of novels and screenplays. “Open And Shut” was his first novel; “First Degree,” his second novel, was named a best book of 2003 by Publishers Weekly. He currently lives in Southern California with his wife and 35 dogs.

Are you a JD Robb fan? Rosenfelt fan? (I prefer the JD Robb books to the Nora Roberts books—not a romance fan.)

New Review-The Cuts That Cure by Arthur Herbert-Alex has had all he can take as a surgeon. He applies for a job as a science teacher in a small Texas town. They are happy to have him as the new teacher but his duties will also include assisting with the cross-country track team. Far away from the rigors of twelve-hour surgery shifts Alex starts his new life. His best runner is a young man named Harvey Wallis. Harvey is a loner and an excellent runner ⁠
New Review-Hell’s Half Acre (Coffin Cove Mysteries Bk 2) by Jackie Elliott--In the plans to regenerate the town, they will repair, rebuild, and modernize, but Coffin Cove has a dark past that includes biker gangs, drugs, and murder. There are stories, unfortunate and sad, that haunt the village, unsolved, that continues to linger like a pall over the residents. Ricky’s body isn’t the first to be found but it does seem to have set off a spate of retributions. I enjoyed the historical aspects of the location, descriptions of the area, the immersive characters. Released today!⁠
New Review- The Big Gamble (Dev Haskell Private Investigator Book 28) by Mike Faricy-Dev is investigating why two of Fat Tubby’s establishments were robbed. Everyone knows you do not cross Fat Tubby.⁠
TV Netflix movie The Guernsey Literary and Potato Peel Pie Society vs #Audiobook by Mary Anne Shaffer and Annie Barrows – My shocking reaction to the novel. We watched the movie first and just recently discovered the audiobook in my favorite handy dandy audiobook library selection. I had NO idea it is an epistolary fiction novel--that is--letters. The whole narrative written in the form of exchanges of letters. Bestselling novel published ten years ago, tons of reviews all over the board. Do you like that form of novel? Do you enjoy that style of book? Which did I enjoy the most? The movie or the novel? Did you both read and view the movie? ⁠
New Review-A Trail of Lies by Kylie Logan-(A Jazz Ramsey Mystery Book 3)-- I like the protagonists’ dogged character—she WILL get answers. She is training Wally, a 7 mo Airedale terrior to be a HRD dog. Interference comes with her boyfriend's mother who believes she saw her dead son in the back yard. But she is an alcoholic and difficult to take that very seriously. Even Wally can't find a body. But then one shows up--oops. Smart dogs and the people who train them. I enjoy this series--slightly more serious than a cozy genre, characters still being developed and new dog to work with. Now on pre-order.⁠
Dry Bones: A Longmire Mystery (Walt Longmire Mysteries Book 11) by Craig Johnson- You can’t go wrong with a Longmire episode. Strong, dynamic characters, atmospheric and fast-paced. Each can be read as a standalone but you'll want to get to know the characters and the author's dry but wild sense of humor. This entry to the series nails the custody battle of the discovery of T-rex bones--on private reservation land--and what happened to the owner of the property. My 5 stars.⁠